Antoni Miró or the subtle revolution

Art is very difficult —impossible— to define, able to adopt forms and expressions that are infinite, inexhaustible and always surprising, like the iridescent flash of a red flower that bursts open in the middle of monotonous snow. The only moment when you are hit by the unmistakable feeling that humankind is something more than a collection of walking, hungry guts is while gazing at art. It is possible that goodness, which is selfless by definition, also has this quality —paradoxically, both distressing and calming—, this kind of reconciliation with the sad and mortifying human adventure.

No, art cannot be defined, not even with that classical simplicity that talks about the search for beauty —because, is not a good part of contemporary art an exaltation of ugliness?— But, on the other hand, it is possible to find a few traits that appear when art exists: pain, for example —a very subtle pain, unseizable, in the winged grace of Giotto’s Annunciation Virgin or in Vermeer’s radiant visit to Delft; or an abrupt, sharp pain in Munch’s Shout or in Gauguin’s disturbing red dog-; their author’s personal imprint, so that a new, unprecedented way to paint appears, as if nobody had ever painted before; the control of technique, from the ingenuous characteristics of naïf to hyperrealism’s demanding photographic painting, so that improvisation and amateurism are no more than artistic anecdote. It could be that there are more features that are common to art of every age and style; maybe not: this certainly happens, for example, with the subversion of art; I am not talking about social realism which has left us a pretty weak legacy, but about the subversion of Art, in capital letters; the subversion that the famous paradox of the King and the Poet talks about: the King needs the Poet to enhance his kingdom’s prestige, and the Poet needs the King to make his art possible. At the same time both the King and the Poet repel each other, since the Poet’s possible world is not the world that the King controls and dominates and so the Poet becomes a threat to the King and the King a threat to the Poet.

And yet, the traits I have stressed —pain, a characteristic voice and technique- are precisely the traits that characterize Antoni Miró’s work. Pain is explicit in many of his periods; in others pain turns into sarcasm; and, in others, it hides behind images that are clean and surreal and that appear abruptly from the depths of the canvas like a revelation: the revelation that the world is not what you had looked at until now but. Antoni Miró’s world that offers you his newest eyes to transgress the domesticated point of view that you have inherited, Miró’s very personal brush is the most impressive coup de grâce in his work; it is impossible not to identify one of Antoni Miró’s works, mystifications do not fit: an Antoni Miró is an Antoni Miró and no other painter is like him as he is not like any other painter. The Miró touch appears even in his famous Pinteu Pintura –paint paint– series, in which he pays homage honestly and brilliantly to the painters he admires: that Dali is no longer a Dalí that Picasso is no longer a Picasso, neither is that Magritte any longer a Magritte because they are unequivocally the work of Antoni Miró. And, finally, technique, obsessively strict in all of Miró’s work, that permits him to cover the whole range and to perceive all the roads with the ease of someone who knows the route by heart.

A painter like Antoni Miró could have been born anywhere on Earth and yet gives us the impression that he could only be a Catalan from Alcoi. The history of art is surprising enough that we can reject the automatic idea that each country produces its own painters: of a certain kind and of no other. No: it is true that a dutchman from the 17th century is dutcher and more 17th century than any other, and it is true that an abstract American from the 20th century is more abstract and more American than anyone else, but nothing is that simple: Guatemala, for example, has produced more artists than Switzerland, and the Catalan Countries, defeated and humiliated at the beginning of the 18th century, have produced more artists than exultant Castille since then.

We also should not be mechanical when talking of the style of each painter: the detritus painters are, mostly, sons of the opulent United States; and it is also not true that light is exclusively Mediterranean —Goya’s light is, literally, dazzling— When everything is taken into account, Antoni Miró, who is so universal, could only be from where he is. And not precisely to fall into the topics that Valencians are frequently defined by: he is neither a sentimental painter nor is he ever a vulgar one, the two traits that are used to simplify us Valencians. To the contrary: Antoni Miró’s clean, flat, clear, diaphanous brushstroke is closer to the Apollonian than to the Dionysian, and his canvasses contain as much intelligence as passion. Why, though, do we have the feeling that it could only have been painted in this way by a Catalan from the South? It is impossible to answer this question, but it is true that —I have tried this more than once— any spectator, even those who are not painting experts, agree that Miró’s work belongs to a definite place in the Mediterranean; it belongs exactly to Alcoi, where no scent of salt or marine dampness reaches, but which has a hard and diamond —like vault of heaven and colours —from ochre to green— that are especially intense.

There is a unique opportunity in exploring Antoni Miró’s work: the opportunity to open a window that until now had been obstinately closed, and to discern the unusual magic of a new world; or, even better, a new look at an old world. Subversion, then, and such a deep subversion that the spectator is transformed while looking at Miró, and realizes that life, things, thoughts and feelings will never be the same again because Miró has changed reality and has brought the Poet’s possible world that so worries the King up to date. All the kings on Earth, all the world’s powerful, all those that, while wearing crowns or stripes, have lost the power to look and, probably, to live. 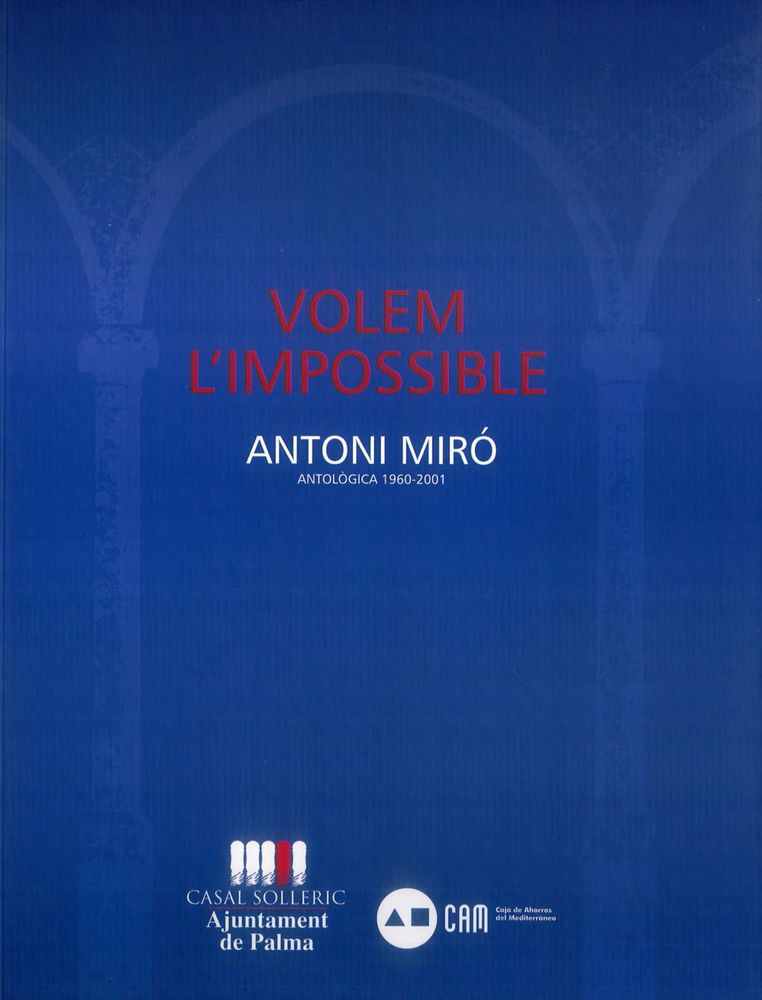