'Pinteu Pintura' (Painting the painting). Here it is a program for an entire decade, in the classic way, which we forget very often. And, above all, discipline and trade; as an artisan sometimes as a craftsman or industrial like the landscape of Miró. That is called learning, and above all capturing what surrounds those who look at them in a clean way, without blinkers. A gaze in a sense of belonging, of identity. One day a landscape, another, a tiny everyday story. An object, a tool, a tiny transport instrument or related to sports such as the bicycle for example; or the hoe, or the use of the loom.

The trade goes first. Drawing, cutting out the space by the lines, flooding it in the reflection of colours; close to the reality of the eye but also to what the eye provides to the brain, to the knowledge. A lot of work, a lot of sentiments. The sober contention is part of the way of artist personality, halfway between the demiurge and the interpreter always, after the actor. Yes, discipline and seriousness. Learning from the trade, versatility in the use of techniques; in short, the appropriate use of the instruments at your disposal. To what extent? The commitment is, above all, with the trade, with the language of the painter trade, the sculptor, the creator of challenging spaces for the retina and the imagination, for the senses. Is the rest, including the results for the viewer, an accessory?

Not that much. There is no innocence in any creation. Neither is there in Sopalmo, in Antonio Miró's house. All the effort in learning the trade, all the scores do not hide but show a desire for a belligerent and daring commitment with the known, observable and tangible country and its people. Palpable, in the most carnal sense of the expression.

That the barbarians were in the square was already reminded by Kavafis. To report them, to expose them is our occupation. The civic duty of denunciation and, above all, an act of hygiene to which the creation, the irony, and the force of reason effectively contribute. It deserves to be mentioned that it must be emphasized, that is to say, to win the game. It would be enough just knowing that we are only provisional losers of an unfair destiny as Marc Bloch proclaimed shortly before being shot by the Nazis. The temporary situation of the unfair destiny lasted in our country for too long, and there are still those who would like to return to such a sinister period.

Miró said "enough" with the weapons at his disposal. A hemp, a brush, a paper, some cans of paint. And his hands, his eyes, his head. From the rigour of reason to the cleanliness of the look combined with the trade. I admit to be moved by the synthesis. From another trade, which includes "putting words together", written or spoken, everything is difficult. Or at least it seems arduous to me. How rough it must also be to resolve in a space of two or three dimensions, emotions, decoded messages, denunciation, and irony; everything at once. Furthermore, to be pleasant, even in the violence of the denunciation or in the morbid incitement of the human body.

It is "enough" with an uncivil, harsh, inhospitable environment in which we had to live and coexist with. "Enough" of communion using "millstones". "Enough" of the wild and unmerciful destruction of the landscape and the cities. "Enough" of the connivance with those who, like Lampedusa, only wanted something to change so that everything would continue as "before", an unhappy period.

Commitment. A damn word. As an intellectual. Like so many others spoiled by indecent sovereignty. And, nevertheless, necessary. History is not over as it was wanted by the false prophets of post-modernity, post-democracy, the liquidators of the avant-garde. The walls of ignominy collapsed but, as Octavio Paz wanted, the questions still survive. And the causes of the questions; the injustice, the lack of solidarity, the absence of freedom, or worse still, the attacks against the reason in the name of freedom.

The trade, the tenacity, the neatness of Miró, with more than forty years under his belt, answers to peace questions. It is necessary to raise a wall of reason, to recover the permanent values of commitment without renouncing to the lucid gaze, to the denunciation of one's sins by revealing the contradictions, the successes, the threats of the trade.

And if necessary, we will use other resources including once again those of the trade. It is not necessary to lock oneself in the frame of the picture, we can "overflow" it in a kind of permanent excitement to the spillover that the same excess of aggression propitiates, incites. The difficult combination between excessiveness and restraint is, precisely, the measure of the quiet and disturbing trade of Antoni Miró.

To some extent, my text responds to my concern by being "portrayed"; victim and actor at the same time. The restlessness provoked by the inquisitorial, clean, often cold eye, with the bitter aftertaste of the memory of what was necessary, or not?, "to reflect". And at the same time, the endearing complicity of common commitments, the memory linked to people, to the country. Sessions of slow scrutiny, with the eye interposed of the camera, under the crude light of a space in which only the essential colour references accompanied the talk.

Disturbing as I understand all intellectual stimulation must be. Searching for an elusive truth, for an everyday reality. We are not scared. Fear is part of our imagination, of our own consciousness of being. Those who are "safe" provoke terror to me, I am scared of them. And there is no reason why I cannot point it out, the everyday object, the bicycle, the hoe are disturbing. They carry illusions or misfortunes, and both serve to go through happiness and to sow the harvest, but they can also cause misfortune and forgetfulness. Nothing is innocent, and everything incites restlessness in the formal attainment of beauty.

Let's be clear. Miró immersed himself with joy in the promiscuity as expected. Promiscuity of the "techniques", finally reduced to their instrumental role as it should be. Put them back and I wish it were like that in all trades, from academia to politics for example. Thanks to the materials at his disposal, from paper to digital cameras, from clay to bronze, nothing can resist the fascination of becoming a piece of reflection, of incitement to reflection. Is that magical? The expression does not please me; the magic is outside the reason, the demands of the trade. Nor do I share magical, contradictory realism. Perhaps it is the discovery of other spaces, which only the Miró's trade allows us to remake, in our imagination and from our capacity to become accomplices of his permanent research.

He comes to say, "here there is a sample; do whatever you want. My opinion is that it is necessary to be belligerents. But there is nothing wrong with just staying in the enjoyment". It is a whole code we would have to thank him for. To the extent that it corresponds to some old values and principles that the old European culture of the pre-Socratic philosophers to Kant has defended: the right to express themselves, to denounce, and to the proposal with no limitation in any of the cases.

Of course, the reference to the immediate, to the everyday, will make Miró propose us devastating iconographies, from war to leisure, from misfortune to voracity over the environment. Welcome to reality from which he never fled nor did he want to. The daily referents are the best antidote against oblivion, escapism, desertion. Certainly the result, as Román de la Calle underlines very well, can be "images of the images" which are at our disposal thanks to the media. Precisely in the Brechtian distance, and Miró's clean gaze, we can reconstruct them much better by internalizing values or derogatory evaluations.

There is something left. Perhaps the author, Miró, wants to "preach", to send out "messages", "mobilize the masses". I guess it occurred to him at some point. His work does not need such an attachment. He, as a citizen, can do whatever he wants but given the restrictions, it will not be so much either... His work is "emancipated", if it can be said that way. And neither the author nor the work needs the preaching, the message or the mobilizations. Painting the painting was already a program. A decade later the trade and the capacity are proven. The denounce, as the proposal can be found in his work, is the oldest or the most immediate one. He also demanded, rightly, "to ask for the impossible" to at least reach the attainable.

As the pleasure of living, the only gap that cannot be filled by the intransigent, the beasts and the barbarians who have already settled among us. In the end, a typical dish (arròs negre) and a traditional liqueur (herbero), apart from being healthy can be as subversive as a photograph "interpreted" by Miró on the border of Palestine and Israel, and perhaps more certain than the imprecise division that Miró denounces in the trap landscape of the world, there in biblical land or in the Twin Towers.

And everything is daily. Wrapped in the charm of what we think we see, and that Miró has seen by and for us.

As much as reality, without any discredit. Fuster, in an indispensable book, already warned about the phenomena of the perception of reality, of its distortion to bring us closer to a more precise and distant perception by considering the credit of the reality and the opportune interpretation and manipulation of Antoni Miró.

Thanks, Toni Miró. And I hope Sofia and Sopalmo allow us to enjoy your daily fascination. 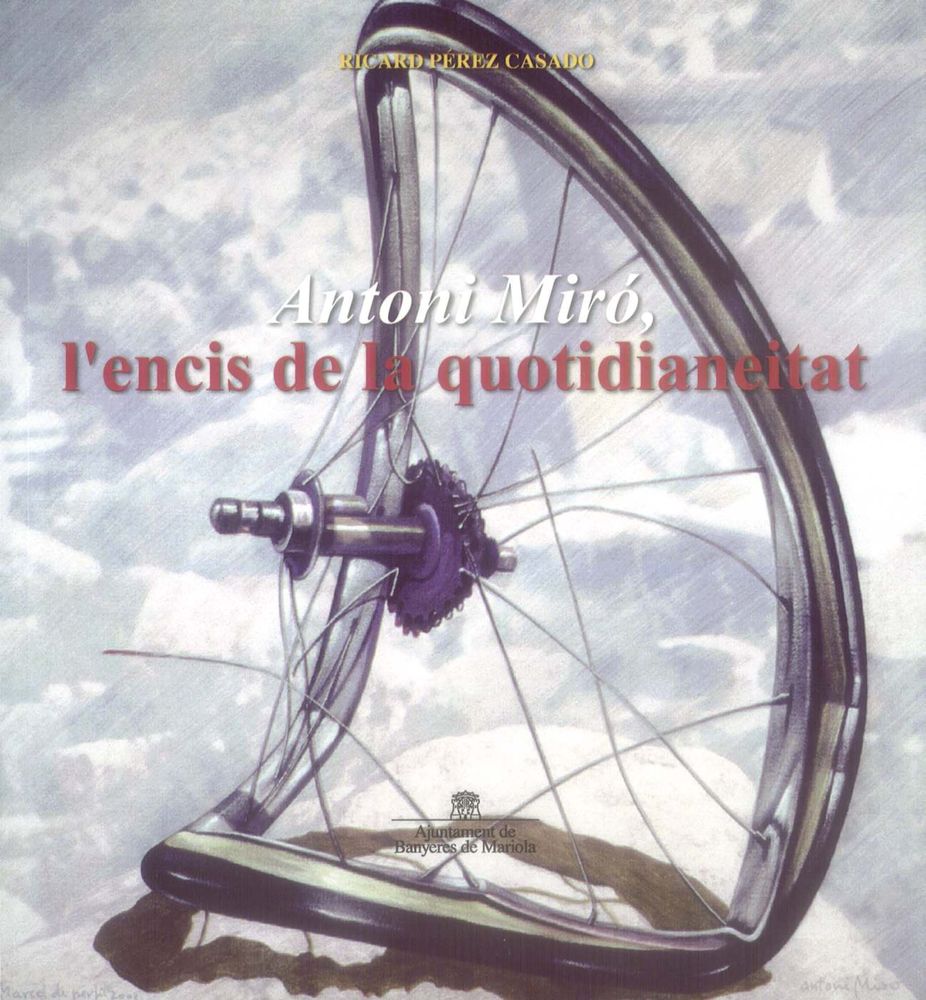