“In my opinion, what grips us so powerfully can only be the artist’s intention, in what he has succeeded to express with his work getting us to understand it. I realize that it cannot be merely a matter of intellectual comprehension; what he aims to is to awaken in us the same emotional attitude, the same mental constellation which in him produced the impetus to create.”
SIGMUND FREUD (*)

The comunicative capacity of the human face is certainly surprising. It could also be said that even in its most hieratical inexpressivness it appeals to, in some way, the dialogue of the look and the deliberation of the potencial and concrete animic state of the subject, from a series of facial codes which register, translate and strengthen the diverse vital interchanges with the surroundings.

From there the very singular power that the portraits holds and the attraction and incidence which usually holds over our hermeneutical activity, from the very moment in which we initiate the apprenhension and reading of its features, directly modeled in the physical substractum of the plastic forms.

Such interest crosses the inmediate plane of the denotative representation to open itself, in a simultaneous way, to the particular expresive language, with which it completes the anthopological game of the connotation. And it is just at this level (in which even the most insignificant form all variations draw signs) where with greater earnetness ardour and intensity generates a specific dialectical tension from the strict forms carrying to the particular in dividualization with reference to the character and those elements which facilitate certain communicative keys to penetrate in the existencial redoubt in good measure, however, shared-of the intimate human reality.

From this contex —where reference and expression amalgamate closely— we must recognize that the conographic repertoire developed around the figure and personality of Sigmund Freud is more and more extensive. Perhaps because of its concrete and marked significance, caught up the same roots of contemporary thinking, his image has interested the artist domain in a very special way.

Nevertheless, curiously, the wise inclination to the mental associations —which he knew how to study and impulse so well— makes it, in fact, unviable for us to punctually separate the representation of the face with all historical baggage surrounding the lee of his personal psychoanalytical planning.

Sigmund Freud, whether we like it or not, has been converted into a polemic common legacy of our epoch. Because of this, it is difficul to think of him dispassionnalely. And from there, also, the ambiguous force —between symbolic and fetichist— which his same image acquires.

In any case, the proper artistic manifestations, which in a certain measure never stopped interesting him because of its rich content and substitutive function , were widely influenced by the supposed explicative and diferent derivatives of Freudism.

It is just therefore that in its turn it converts the same character in priviledged matter-subject of the esthetic shapes. Antoni Miró, with this series of etchings, opportunely carried out to coincide with the celebration of the 33rd ternational Psychoanalytical Con­gress (IРAС) in Madrid, wanted to look beyond the mere limits of the reference portrayal, to penetrate, historically and expresively, the singular reference of the mytical personality of Sigmund Freud.

The visual text which he has yielded, in the careful chain of his engravings, carried out interpretation behind the sublime and liberator game of fantasy. Could it be possible, at least for once, to openly face the beginning of pleasure to the beginning of reality, to superimpose sensitivity —with reference to the pulsation of "IT"— to the calculated reason to the function of "I"?

As a result of this uniqual opposition, between the creative impulses and the resistances, which untiringly accompany every process of artistic realization, Antonio Miró has known how to adequately choose determined situations in the life of Sigmund Freud (“L’exili", "Quatre retrats", "In London", "1856-1939", and "Freud to t Freud") in which particular motivations which accelerate and impulse his work are anchored.

Knowing the capacity and the resources of A. Miró, we must recognize that he could have decided on a certain dadaism or surrealisme which would openly and even opportunely justify his freudian roots, but he ended up preferring the direct image of the personage, extenuating this way, the ever present tempting metonymical game of the substitution.

If the dynamic of the artistic forms, as a cultural reality, oscillate between the impulese of nature and the legacy of history, there is no doubt that here we have been offered, visually, the approximation to a history of a very singular nature, whose keys are modulated from the disencumbered features of a well known face, and whose meaning is found woven in the fundamental herecy of our century.

(*) The Moses of Michelangelo. 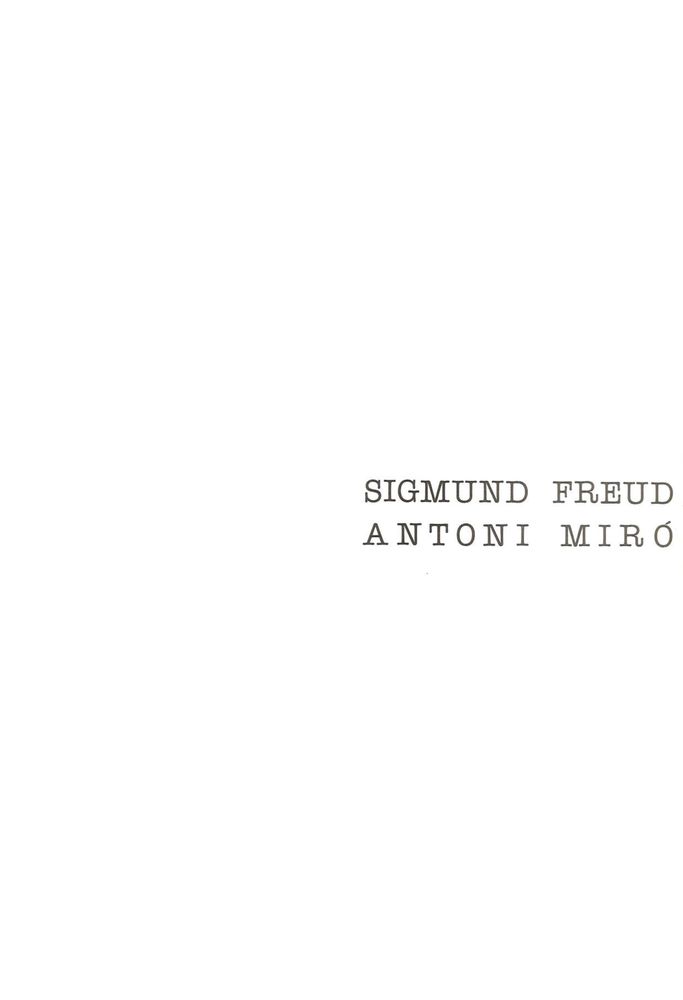