This is not an essay on Miró

Foucault’s structural error in his essay on Miró is, in fact, to subtitle it Essay on Magritte when, in the light of his analysis of symbiosis with the pictorial proposal mentioned, should have been named This is not an essay on Magritte because we are speaking about a book, a tangible non-metaphysical object, the text of which refers to, but is not the referent. It refers to the pipe, let’s concentrate on it: classical shape of a pipe, harmonious black curve, of briar because the quality is assumed, light because it always appears levitating in a space without contours. To the pipes, because in fact, there are two of them, one suspended in the air and the other in scribed by flotation on the fabric. The title of the essay, of the picture and of the phrase written on the fabric are all the same: Ceci n’est pas une pipe. The meaning of this negation is the starting point of a series of questions that means arrogant intrigues, between the original and the image, between the image and the phrase referred to it, between identity and similarity, it enters the circuit and will not know where to stop. The picture does not represent, nor say anything, the infinite game of similarities retreat continuously upon itself without resending it to an on original tangible. It is the old alphabetical antinomy between showing and mentioning, nothing exists until it has a name, but when we say that it does not exist we are already mentioning it. The plastic astonishment and the aesthetic inspiration come from redundancy, from the disturbing effect which that redundancy produces.

Miró has a particular concept of redundancy. He does not amend the plan to Magritte, he extra limits himself to folding the corner of the page signed by Foucault so that when it folds, it folds the double game of calligram, ability to say the same things twice when only one would undoubtedly be enough and not even that would be necessary, because the manner is very well known and the name extremely familiar: concatenation of the binary system, of a dichotomy key. Miró’s inspiration is nourished of a previous iconography as a selection of the ancestors themselves (I come from him who stimulates me, not from him who precedes me) in which, the colour, spot or figure, it introduces the word. All of them are valid, one to one or all in a group, the registered trademark, the saying, the idiom, the literate quotation or the previous title of another work. All of them have the auto referred capacity of language which not only is a medium but also turns into grapheme, a sign with symbolic capacity that belongs to structure and balances its composition. Polysemy that flies and keeps you awake: glides all over the linen and explains connections. In the images, because of their own essence, the auto allusive game that can range from the trivial object is being reproduced with more strength, like a hundred dollar bill (it is possible to trivialize the dollar in painting because its use is not fiduciary: in gold we trust), to Picasso’s Guernica. There is love towards some great masters who appear unexpectedly, friends who come home at lunch time without letting us know previously and, even so, are welcome. Magritte’s recidivism is, among the others, the one that makes us happier because there is nobody like him to play the card game of parallel mirrors. Parallel but not flat.

I am watching four pictures of Miró:

The pipe (redundancy is served) is not a pipe. When folding the corner of the page, widely, margin include, the calligram derives towards the uncertain chaos, a pleonastic chaos, which we do not really know whether it is different, where each thing is different from the other, or the same, where each thing is the same to any other. Miró’s point of redundancy is not contemptible at all.

Words and things keep puzzling out between them in Magritte, prisoners of a conceptual trick that obliges them to face each other in the double symbolic convention of letter and image, puzzling out which does not produce certainty but precisely the contrary. Foucault confirms the presence of two pipes and interrogates himself: should we not say two drawings of the same pipe? or also one pipe and its drawing, or also two drawings one of whose represent one pipe but not the other, or also two drawings none of those represented pipes, or also a drawing which does not represent one pipe but another drawing which represents, this one does, one pipe, in a way that makes him keep wondering. What is the phrase written on the picture referring to? To the drawing under which is it immediately placed? “Look at those features assembled on the black board, even though they resemble each other, without the least differences, without the least infidelity, to that shown up there, do not fool yourselves, the pipe is up there and not in this elementary grapheme”. But perhaps the phrase is exactly referred to that excessive pipe, floating, ideal, simple dream or idea of a pipe. Or perhaps not.

What disconcerts us is the fact that it is inevitable not to relate the text with the drawing, and that is impossible to describe the plan which allows us to say the assertion is true, false or contradictory: trick of the perpetual antagonism between word and image. Or maybe it is not so impossible if we appeal to the routine of translation, sorcery that can lead us to double graph at the third or umpteenth symbolism proposed by Miró’s point. Let’s see. How “cette phrase en français est difficile à traduire on espagnol” must be translated? Even if we did not know a word of French we would be able to understand the problem throughout a translation: “this phrase in French is difficult to translate in to Spanish”. What is the last phrase’s subject referring to? If it refers to the phrase in Spanish then the subject enters in to contradiction with itself and the phrase in Spanish would be false (while the original one would be true and in offensive), but if it is referred to the phrase in French, it loses its auto allusive character when translating and with it the enchantment of what upsets in art and literature.

If in analogy to this translation we work on the phrase “ceci n’est pas une pipe”, what we said before about the French is valid here (equivalent, of course) to the object pipe, and what we said to the Spanish is valid for the title of the picture. The equivalence does not elucidate the problem, but it does permit us see it more clearly and essay with the same analogy about the superimposed pictures of Magritte and Miró. It is the game of the curved parallel mirrors: science reassures but art upsets.

The point in Miró is changing fiction into reality: the fiction in the paintings into the reality of his painting, distilled to its essence in the vessel of his own style that is able to show organic stuff in bold, almost geometric patterns. Complexity leaps from the creative process to the spectator’s interpretation and so anyone of the above mentioned compositions might ask its onlooker “is it you who is looking at me or is it somebody else? If it is somebody else, please, withdraw and leave the place to your own ego”. The spectator, more a seer than a viewer, wonders if he is Miró or Magritte, if he is Foucault or myself or my reader or who knows; and that is not because he is in doubt about who is behind his pupils, but because what he has in front of them reminds him of the tale about the good pipe (the feedback tale or the everlasting story?), where you can only break in by letting yourself be carried on by the hypnotic charm of its dissimilar repetitions.

Redundancy is his point and his complicity wink at Magritte could be perhaps one of the most fruitful and upsetting among the ones he interchanges with the great masters, because the Belgian master is also very fond of such a challenging and deceitful game. “Who shall we tease?” both of the accomplices could eventually tell us, “Who would be able to smoke the pipe of one of our pictures? Nobody, so they are not pipes”. At this evidence, the witty and above all reader realizes that everything he has been reading to this full stop (why stop if it does not stop and it is no full?) is a piece of writing referring to a set of four of Miró’s1 paintings, which epistemologically is not a review, and ontologically is not an essay.

Among the evidences implicit in “This is not an essay on Miró” the exactness of Foucault’s electromagnetic and pendular laws ought to be included, although as a background, in sharp contrast with the homonymous hypothesis on the logic interaction between graphs of a different kind2.

1. It is Antoni Miró. Please be careful about heteronymous and redundancies. The same for Michel Foucault.

2. The text of the “Non essay” can be folded as many times as you wish and the only limit is the publisher’s. The redundancy effect becomes multiplied if every fold relates to a different language but in the same family, for example Galician, Spanish, Italian, Catalan, French... Be careful about the linguistic correspondence in “This French sentence is difficult to translate in to Spanish”. 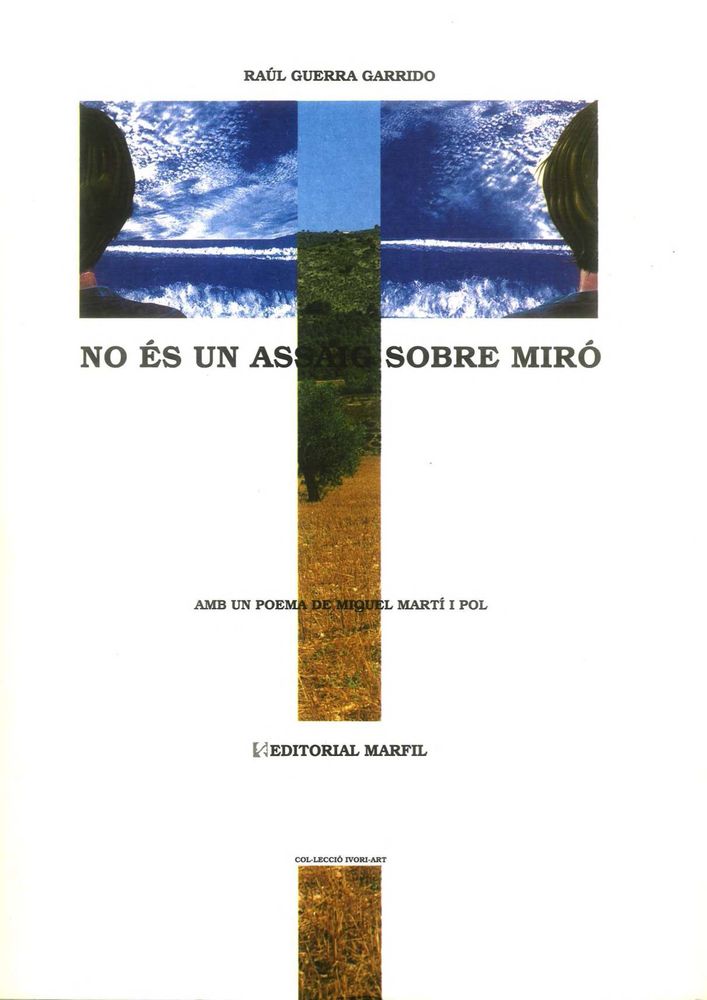