The Catalan question in Antoni Miró

(In the crux of the matter, the problem of self-determination, autonomy, economic independence is just a part of the issue: the formation of independent national states by groups of different nationalities.)

The work of Antoni Miró can never be described as an isolated event, torn from the historical discourse and the reality development of the Spanish state. It suggests the contemplation of what has happened to his work. And, in this case, we have to keep in mind the essential question: the struggle (the triumph) of the world materialist conception against the another idealist conception which considers any phenomenon as isolated, static, unrelated to those surrounding the art by the ruling class to render useless its possible offensive influence; to strip it of effectiveness in the class-conscious confrontation; to reduce it to a mere aesthetic corpse.

It is also known that materialism or the dialectical conception of things and phenomena rests on the same knowledge-result of practice. Thus, the work of Antoni Miró is simply a political work. It is nothing else but the result (a painting, a sculpture) of the knowledge application arising from social practice, production, class struggle. History and geography act here as defining elements. Miró lets us see a reality in which there is no place for uncertainty. It is a Catalan reality, and we must immediately consider that this is neither anecdotal nor superficial product of political fashion, nor even the result of an emotional nationalism translation. On the contrary, the activity of this painter from Alcoy is consistent with a scientific analysis of the Catalan question in unavoidable connection with the reality of the Spanish state.

Taking the example of the bourgeoisie, the ruling class (who doubts it? has had to decide to the renewal of its structures exposed to asphyxia, increasingly removed from the world capitalism development and, specifically, from the closest area: Europe. This is the consequence after the long period of Franco’s dictatorship (not fascist). The first step has been what we can officially call the arrival of democracy. That is to say, the concession of several bourgeois-democratic liberties meaning the consolidation of the dictatorship and of the bourgeoisie under other “more democratic” political forms. And concerning the economic aspect, the intention to leave behind the crisis sooner rather than later. And as the ruling class takes the initiative, this has to be understood as the bourgeoisie intends, by itself, to be rebounded of the economic crisis through the participation and collaboration of the legalized political parties (not all). Among them, those who have abandoned the class struggle in their theoretical formulations.

Results: the two-chamber parliament establishment, in one of which, the Senate, the region representatives will be sit; deputies and most of the senators election by vote; political parties legalization (not all), etc. The Devaluation of the currency to ensure foreign trade with the consequent increase in prices of imported goods (oil); chain of price increases in the interior; freezing of wages; rising unemployment figures (one and a half million workers, one hundred thousand in Barcelona), etc. So that the emerging from crisis is loaded, on very specific backs, those of the working class which remains weak and disorganized. It is only needed to remember that, in recent years, all their actions have been defensive. Only in the Basque Country, for reasons that are not the subject of these lines, offensive actions have been registered although (this is another question) they can be classified as incorrect.

But bourgeois-democratic liberties take advantages. So, among others, they allow that, even from the power, the question of nationalities to be reformulated. A question that in the Catalan case does not go beyond the recognition of the Generalitat government and the Statute of 32. As a counterpart, the Catalan-Valencian competition remains, the Valencian Country continues within the geographical entelechy that has been called Levante, or the Ministerio del Interior (Ministry of internal affairs) denies the registration of the PSAN (Catalan Socialist Party of National Liberation) in the political associations’ register since it pursues the attainment of political independence of the so-called “Catalan Countries”.

We have to repeat it, the bourgeoisie takes the initiative. And the Catalan bourgeoisie takes the initiative in the demand for national claims. And it has the power to summon all social classes because they unconditionally pay for their aspirations. It is necessary, then, to bear in mind the interest of a counter-revolutionary class which calls for autonomy as a means to achieve and maintain several privileges without abdicating, hence its internationalist character. Is not the capital of different nationalities represented on the boards of directors?

I think that Antoni Miró sees this issue clearly when, in painting “Les llances”, he gathers workers, peasants and intellectuals giving in to the centralist power. Or when he conceives a pathetic vision not exempt from workers’ humour whose central axis is a rope for strength and a Catalan flag for the balls. Where is the bourgeoisie? Miró seems to warn us of this class complicity that, being in favour of a political apparatus at the Spanish state level, raises the flag of Catalanism in response to the need to increase and maintain its political and economic weight.

It deserves to be repeated: the situation has some advantages. And this situation leads to a general democratic content against repression, the depersonalization of a collective against the domination of some nationalities over others. And there is no doubt: a progressive position has to assume the defence of that democratic content. Of course, the internationalist character of the classes (bourgeois and workers) and the attitude contrary to bourgeois nationalism must be preserved. In this context, Miró’s proposal is easily understandable: his work raises the Catalan feeling to a universal category by eliminating any vestige of chauvinism. Because... what is left if we eliminate the worker’s sign of nationality; the Catalan flag? This is a general problem affecting all the oppressed workers of the world. The meaning does not disappear.

Those who did not live or work have been, on the contrary, the most exposed ones to a chauvinist sentiment towards (against) the Catalan people; and it has been turned up more than once in popular sectors. The ruling ideology is guilty. For us a twofold and difficult lesson: it will be a noble task to stand for equal rights while, above all, above nationalities, the unity of the popular classes is being placed.

A final question to complete the knowledge process deduced from Antoni Miró. His work, in basic terminology, can be inscribed within the concept of Catalan culture. But, this is an expression that has been conscientiously manipulated since what is called national culture is only the culture of the ruling class. It is, therefore, more appropriate to address this culture as national rather than class culture. In every collective there is an exploited workforce, from which a democratic socialist ideology will emerge to draft a certain culture contrary to the ruling one. It will be, then, a democratic, socialist, class and internationalist culture with different touches of national elements in each country.

In this sense, I believe that we have to consider the Catalan spirit of Antoni Miró so that his pictorial work (political work) will fulfil its vanguard mission. 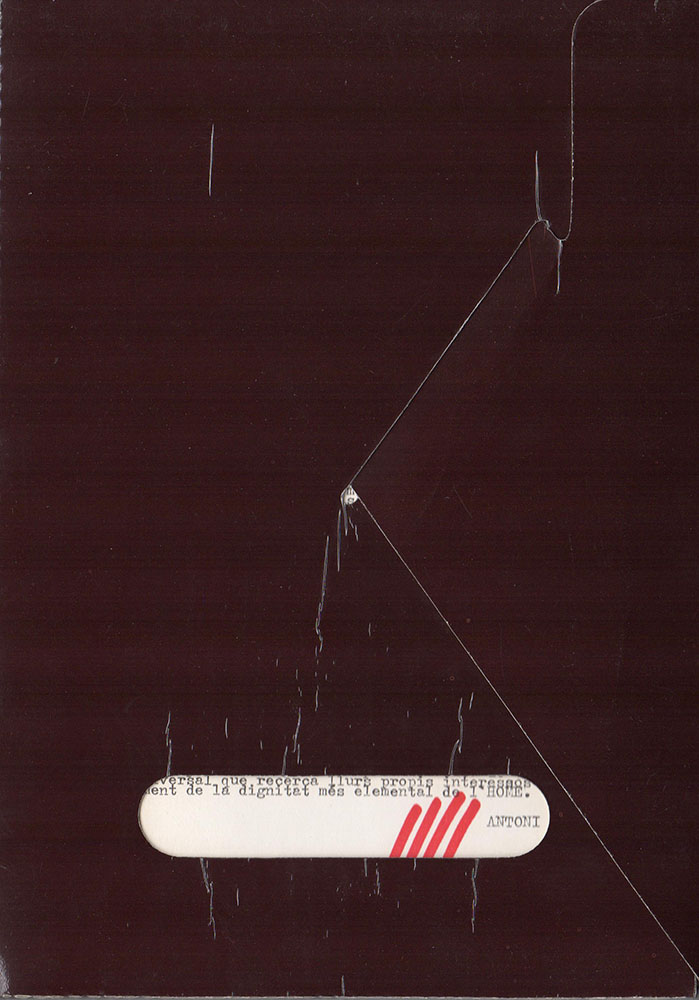