With regard to the eco-social vision implied by Vivace

If on occasions or from given stances, one is inclined to worship certain artistic events understood from their historicity, and at other moments or from other stances, one tends to mistrust the socio-historical processes in order to yield to the tide of extreme originality and an outrageous cult of novelty; if, on the one hand, one stresses the technical knowledge and procedures of the arts, and on the other, one considers that these are not so important, and that creativity is the only source or element worthy of being taken into account; if, in short, we confront the communicative view point -based on vital values, critical concepts and similar ideas- with the plane of the formal, beyond the pertinent comparative examination, we may fall into -if not nourish- uncompromising positions which in any case, are not very suitable for a beneficial attitude towards the artistic fait.

Well, at the beginning of his study of Antoni Miró’s Vivace series, Josep Lluís Peris warns us of these and other related matters by setting his peculiar analysis of this segment of the artistic production of the painter from Alcoi he is lately devoted to. T us the painter himself proves -and has been doing so for some time through his work- that no sort of reductionism, or preference for an exclusive point of view as opposed to others, are good things, when the artistic phenomenon as poiesis, as noesis and as the subject of critical appraisal and aesthetical appreciation, involves a cross of conceptual aspects, technical-constructive ratifications and co-implication with a certain culture. Culture which on the one hand, throws into relief the richness pervading the person’s aesthetic dimension and on the other shows the complexity of the artistic fact that motivates and to a great extent, facilitates such a dimension, from that sphere of concretion that induces many of the desires it finds tempting. The personal aesthetic dimension and the richness of so many diverse works and artistic actions appear in an interaction which is not always easy to define, as multiple influences on the judgement of taste, rupture and linguistic innovation are continually and mutually activated. All this takes place amidst a flux and reflux in the experience of the art of medleys, rebuffs, over ratings and incriminations developed in a great maelstrom, especially since the establishment of modernity and above all, throughout the various plastic proposals to have surpassed this century, so controversial in scope.

Yet the fact is that Antoni Miró -as Peris aptly remarks- has been edifying, from his cognitive receptivity, his sensitivity tinged with creative immanence and the singularity of the personal construction of his poetics, an entire repertoire typical of shapes outside of trends, siren songs, mercantilist and mediatic opportunisms, until affording consistency to his particular pictorial and sculptural task. This consistency oozes with independence, which does not imply disinterestedness regarding what is done and how it is done. Eideitic autonomy, which does not mean conscious or cynical omission of its artistic and human surroundings. In this way the artist’s expressive form -studied, I believe, quite deeply in another book of recent apparition- only sums up and strengthens this conjunction of sensorial, vital and formal values shaping the idiosyncrasy of his plastic oeuvre, where rupture and recuperation, discursively and constructively combined, either contribute to or absorb the renovative airs of modernity with a degree of coherence -consolidation and originality- that favours the persuasion and even the complicity of the viewer.

Yet these reflections spelt out by the art historian and critic Josep Lluís Peris in his text, together with a few other thoughts sensibly gathered there, lead us to its core —the analysis of the Vivace series. Here, in addition to the essential items appearing in the artist’s different series -in a quick reminder of these- Peris highlights how certain presences stemming from literary or publicitary facts can also promote the paradoxical vision of current environmental and ecological issues. In his iconography, Antoni Miró creates a paradoxical relationship between various objects and the medium itself, between this very medium and animals. He also establishes this in an iconical conjunction -articulation with the repertoire of bicycles that constitute the splendid visual edifice affording Vivace an undeniable trade mark1, which perhaps for this reason precisely, sets itself up as a symbolic or metaphorical exponent -especially through beautiful specimens of wild life or the presence of exuberant women with sensual airs- of a sensorial and heavenly world still distant, remote or immune to that entailed by industrial development -pregnant with profitability- which truly is wild (the homonymous fauna excepted).

Like other series, Vivace sends the spectator a sign in order to conceptually engage his/her attitude before that which its fine attractive images paradoxically suggest. The iconical comparison also appears to be a good way of attracting the viewer’s will towards a set of contradictory paradoxes and collateral situations, as a suitable rhetorical figure to oppose (highlight) -Miró, hinc et nunc- the disproportionate interests derived from technological reason, represented by diggers -predators-, demolition containers, -artefacts that end up polluting-, etc. Representation so distanced from that foliage, that verdure, those faces and bodies which, as I say, we imagine living in virgin paradises on earth; representation symbolical of the desire of environmental preservation, something which at the same time already turns out to be a necessity for hum an survival, rather than a dream of return to lost Eden or a propaganda hotbed for demagogic politicians.

Furthermore, that peculiar type of uneasy estrangement or atmosphere of strangeness seeming to float, flow or interfere with the various components -animated or otherwise- abounding in many Mironian works (theatrical elements which in certain instances, he anthropomorphises) also appears (is also felt) in a number of the creations of the present Vivace series. Such an anthropomorphic guise appears in the bicycles which on the one hand, are presented as an adequate parameter for establishing a connection with the viewer, as a key for its decodification, and on the other as an efficient plastic revitalising resort of the composition itself, in which -as Peris correctly remarks- the presence of landscape is as passive as it is defenceless in the face of the human aggression. If this were not enough, this entire collection of velocipedes is also established as a pretext in order for Miró’s lucid talent -recreating these artefacts in a thousand and one ways, each more imaginative than the last- to introduce the playfulness and irony that abound in his work, singularly strengthening the reflectiveness induced by his pictorialist proposals. Similarly, as Peris remarks, the pleasant bicycles appear as an appropriate exercise in iconical intertextuality, something which reminds us of the historical quotations (recuperation) which the artist found so useful in the critical-social elaboration (innovation) of the also brilliant previous series, Pinteu pintura (Paint Paint).

Therefore, conceptual and technical-expressive coherence persists, as unity in variety, throughout Miró’s plastic itinerary. The intensification of images -recreation, assemblage, associations which are new yet not gratuitous- continues to grow until it arrives at what is to date, the last series. Here, such former displays have perhaps enabled the artist to attain, in a subtly vigorous and clearly strong way, a truly poetical trans­mutation of objects. In addition, the forceful level of reification which we have been unable to forget from the times of the Cubist undertaking until its Duchampian consagration, has also come to a natural conclusion in the work of the Alcoian artist, thanks to his way of looking, his intentional position and aesthetical conception, as the author of Antoni Miró. Vivace - Una Visió Ecosocial (Antoni Miró. Vivace - An Eco-social Vision) refers.

In short, by means of a careful introspective exercise in such a creative ensemble, Josep Lluís Peris і Gómez has approached the fundamental planes converging in Antoni Miró’s poetics. Interrelating them conclusively, he has favoured the understanding of their links precisely through the fluency with which Peris handles terms, pinpoints concepts and hints at different theoretical levels and pitches, both from Aesthetics and from Art History and Criticism, as well as other semiological spheres, without neglecting the metalinguistic creativity of his own discourse when tackling the core of Vivace. 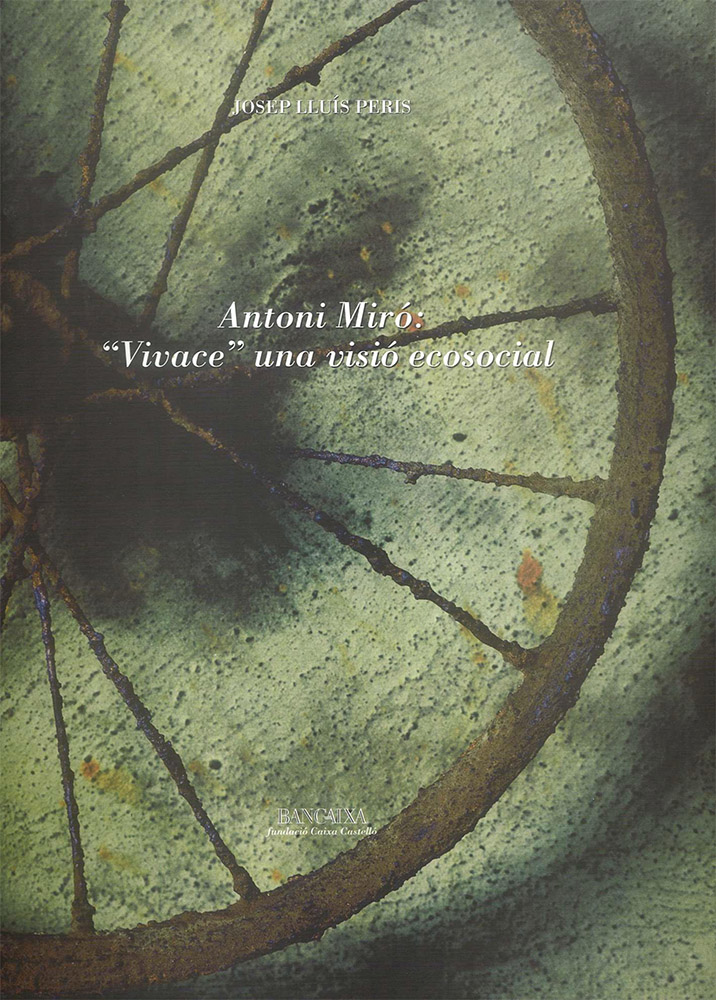