If painting means visually recreating the world through shapes and colours, the world Antoni Miró has re-created with his artistic effort is wide and protean: it ranges from the sexual to political, from a pop interpretation of history to a denunciation of violence, to the sarcastic jibe upon leaders, monuments and sacred events, to the knack of turning daily life objects, machines or devices, into a poetic subject. Antoni Miró’s perspective is such an open one, that it becomes difficult to find that sentence summarizing his whole feelings about things.

If irony is a subtle deployment of wit, meaning the opposite to what is said, this rhetorical figure might be ideal to summarize Antoni Miró’s plastic language. Irony is an essentially Mediterranean dialectic device, the vehicle of intelligence, halfway between awareness and analysis. Antoni Miró is a master at this form of communicating with the viewer, through a hint, a nod that results in a smiling brain.

We could envisage a critique of Antoni Miró in the Angloamerican tradition, consisting in a mere description of each of his paintings, without analyzing his pictorial philosophy or essence, which the German school is so excited with. Should one simply describe each of the icons haunting the mind of this protean artist, the mere accumulation of his figures and images would make up a pictorial substance; such substance would be the representation of the personal world which characterizes Antoni Miró. In absolute freedom, there would arise before us a sarcastic rubbish dump of consumer garbage, sexes, American flags, wire fences and dollar bills, tigers and violins, bicycles, female legs and scissors, lingerie wrapped in knives; this frieze crossing the painter’s subconscious would appear, together with all the ironic tributes he pays to famous works by other painters, to the faces of modem political heroes or to the world of cinema, all as a synthesis of a collective passion.

I can imagine Antoni Miró locked up in his famous cottage, silently enraged by the literary world of politics, by human tragedy, by worldwide injustice; all of them reaching the artist under the shape of news, humming into his house amidst singing birds. His ability to turn this literature into aesthetics, and this aesthetics into rebelliousness, is one of the main features of Antoni Miró’s painting.

The first law of painting states that the world must only be represented by means of a plastic language. Any metaphor, meaning or motif must be subject to purely pictorial codes. Nothing can be said if not in the proper shapes and colours. Perhaps, the second law of art states that one must stop in time; one must be able to check himself at that stage when a work is superbly and masterly unfinished, so that the viewer may reach that point where the artist awaits him, and they can finish the work together. Such wisdom can be attained only by good artists. Undoubtedly, Antoni Miró is one of them.

Antoni Miró’s work can be recognized at first sight. Such is another feature of artists with their own personality: each painting is signed with the digital imprint of each brushstroke. When we look at Antoni Miró’s work and we share with him the long journey he has made, we go through several stages, sometimes deep in sarcasm, some others in irony, some times in the pleasure of the senses, others analyzing the morbid surfaces of object, sometimes rebelling before injustice through a cry of protest; all this creates an awareness of the world surrounding the artist. It is not possible to watch all of Antoni Miró’s paintings without committing oneself beyond his aesthetics, but this artist first invites you to enter his paintings, not literarily through an ideological complicity, but through the rich enjoyment of his brushstrokes.

Between the shady awareness of a reality whose substance is mixed in the palette and the clear logic of facts, the world of Antoni Miró becomes visible. You will recognize it anywhere it hangs. It may be a rhinoceros, a bicycle, a sexual female fragment, a gun, a theft committed in some other painter’s study, a prostituted statue of liberty, any icon belonging to Antoni Miró’s exclusive hideout... whatever it is, it will give the viewer who approaches this picture a sort of intelligent humour, which first leads to a smile, then to tears, and finally to the exclusive consideration of a world linked to a growing awareness. This is the key to understand Antoni Miró. 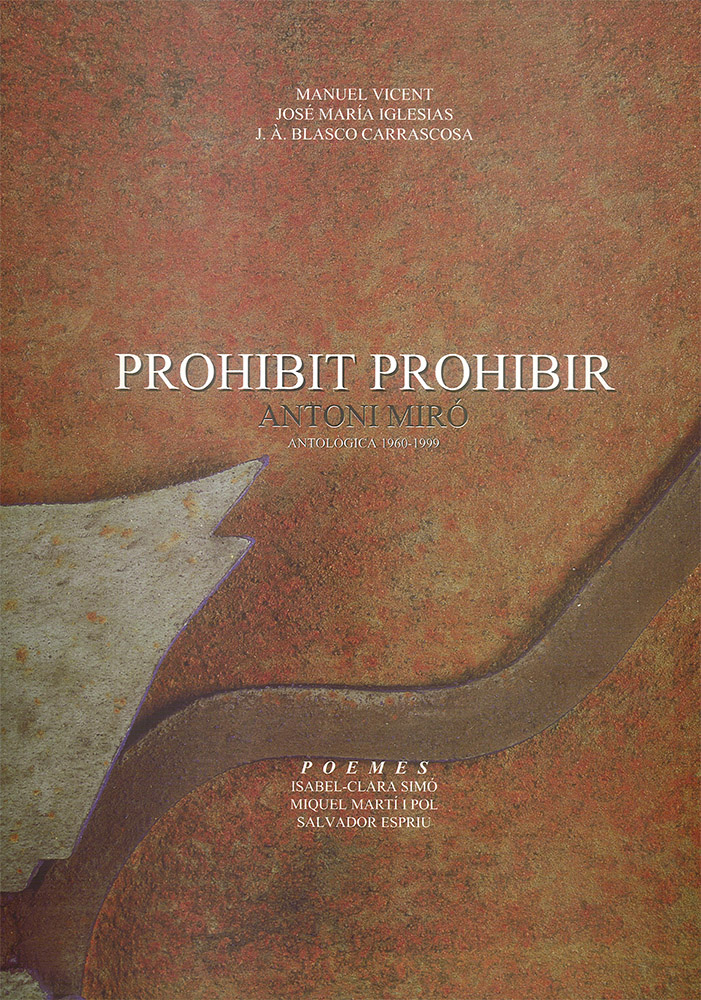