Images from an antonimironian world

One of those days of the transición period - “Oh, sweet seventies!’’, the poet Salvador Jàfer used to exclaim-, as we strolled with friends along the streets full of whitewash, sea air and geraniums in the high part of Altea, Ovidi Montllor, a great friend of Antoni Miró confessed to me: “Toni... Toni is a great worker... and a magnificent painter...” He said it to me with the rural cordiality and the clearly genetic decency that hung on to the entrails of this man. Words that were said by the singer and actor on a long-ago summer afternoon that was already searching for the fine autumn that approached. Words that reverberate in me again. Because, then and now, I consider them to be true.

Antoni Miró was born in Alcoy in 1944. As a youngster, he developed a passion for paintbrushes and for pictorial creation works. He had, at this time, a long career behind his back and an important body of work. We realize this immediately. When we re-read any of the books about him or when we go over any of the many catalogues that talk about or show his accomplishments.

His works are varied. And his series are also diverse. Even though they evidently share common traits: for example, the fact that he practices an art that is closely tied to social commitment. Opera prima, Les Nues, La Fam, Els Bojos, Les Experimentacions and Vietnam were series executed during the sixties. In the next stage we find L’Home, Amèrica Negra, L’Home avui and El Dòlar (magnificent, by the way). Later, Pinteu pintura and Vivace. Lately we find Sense títol.

This new series presents a whole rosary of images, apparently disperse, but united and articulated by a common denominator: a passionate vision of social commitment. Work by work, a complete mythology clearly nationally or internationally, leftist is shown. The snapshots in Viatge interior/Sense títol constitute a pictorial journal or personal/social pictorial workbook. Annotations, visions, compositions, memories, reflections, photographs, self-portraits, documents. And etcetera. Images. Images, in their most free and acute sense. Also, in their more ample and more evident sense.

Sense titol is a kind of journal of images from all over the world. From here and there. Where we detect the most diverse ecological catastrophes, wars, and human situations that are sad and wounding to any good-hearted man or woman, because Antoni Miró’s way of seeing and depicting reality is bitter and incisive. A kind of journal where, as he has for years and years, he points to the symptom, the plague, the social illness or the injustice in this apocalyptic phase of the perverse and abject economic system that we have to live with at the beginning of the 21st century.

But not only that. Antoni Miró uses a satirical register, sharp humour –as if he does or say nothing- to point out to things. And I really believe that they are correct and well structured works.

On other occasions, beside paintings of evident and grandiose catastrophes, one finds a work that shows a bicycle. A surrealist poet called one a dragonfly soul. At this moment I don’t remember who it was. Bicycles are primitive, kind, humble and easy to maintain. Peaceful and magnificent, healthy, beatific, juvenile bicycle. An ecological contraption. A locomotion element that has, on this day and age, a certain revolutionary accent. A bicycle to swim as one should: against the tide.

Let us remember his latest series: Gatanegra 2002 and Via Appia from the same year. It is a vehicle that is present - I remember, I remember it now- in other works and series of his. It conforms, in a certain manner, a kind of self-iconography that we could perfectly name antonimironian.

In Sense títol, and through many years and many of his works, Antoni Miró has told us clearly and repeatedly: he does not like, as happens to many others, the world he has been dealt with to live in. Where he lives. And he says it quite clearly. This is the backbone and the real meaning of his painting and the rest of his artistic realizations. Saying it. The great poet K.P. Kavafis has already said it in some of his prose: “For example I condemn the death penalty. I proclaim it when I find the occasion to, not because I think that if I say it will be abolished in the United States the next day, but because I am convinced that if I say it l contribute to the victory o f my opinion.” I particularly think that there is some of this in the pictorial expression of Antoni Miró, in his general work as well as in his latest series...

And he says it, even when theses are bad times for the poets and magnificent ones for those that are sinister and imbecile. Even though there were those who said that social art and art talking about the surrounding reality, chronicling it, didn’t make much sense, and that it would disappear, it has been seen that the great confabulation of morons, despicable elements and mafia types continues. And it should be confronted. And fought against. Using lucid and critical art as a weapon, like the art that, among others, my friend Antoni Miró practices... 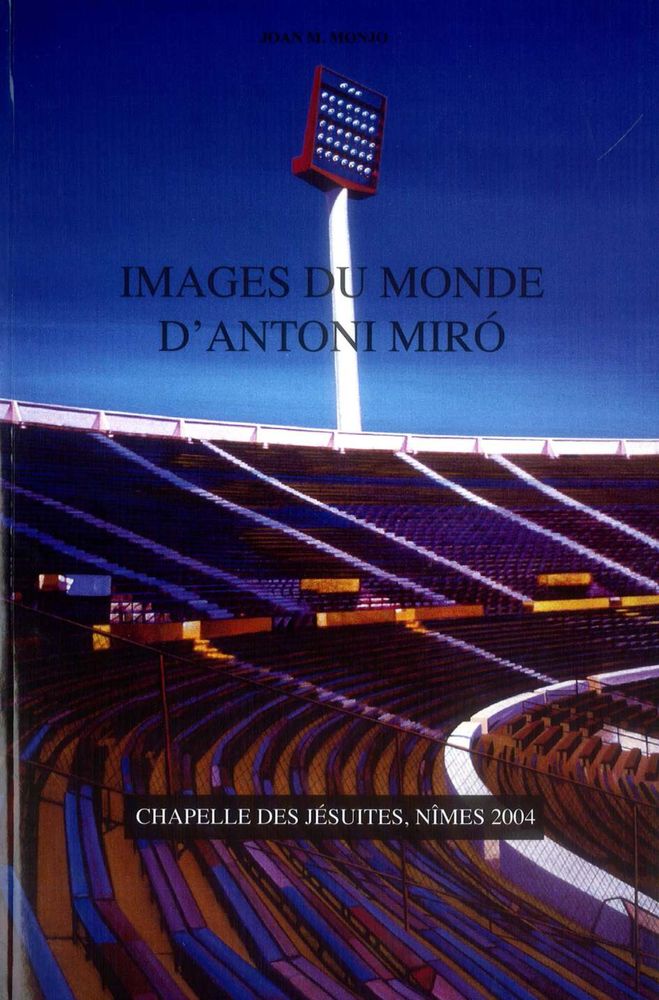