To compose or interpret music is to music emotion and social experience. This is the substance shared among all the arts, also between music and painting. Music painting and painting music, therefore, are part of the exercise of expressing this emotion and social experience as well as painting a landscape, painting a poem or painting a picture. The arts -all of them- are ultimately synesthetic: in the work of listening to colours and seeing sounds, of touching flavours and tasting textures.

The relationship between music and painting comes from far away but becomes closer during romanticism, as a source of mutual inspiration, and blossoms with Debussy's musical impressionism where music borders on pictorial art: "Music is the arithmetic of sound, like optics is the geometry of light, "he said.

At that moment, the need to technically explain this relationship appears: the analogy between harmony and space, tone and perspective, melody and line, sound and colour, ... A corpus of shared terms where it is no longer strange that Wagner or Chopin talked about colour and light related to music.

Klee (painter and violinist) and Kandinsky (painter and cellist) went a step further in the theorization and expression of this relationship. Kandinsky, came to the abstraction in painting with music, with sound as a medium through which abstract concepts are developed that we are able to grasp, not tangible concepts that communicate us with emotions.

Although music and painting inhabit different dimensions – music the time and painting the space - we find ourselves before two of the most similar and complementary arts. That's why we have Debussy painting with music and Kandinsky music with painting. We have "The Island of the Dead" by Arnold Böcklin, played by Sergei Rachmaninov or "Pictures for an exhibition" by Mussorgski, inspired on a posthumous exhibition by Viktor Hartmann. And conversely we have "the violinist" by Marc Chagall inspired by Tchaikovsky.

In this compilation "AntoniMiró, music painting" we also have the word. Although Debussy said "music begins where words are impotent", the song as a musical genre is closely linked to the text. We must understand the voice, of course, as another instrument, but also the word, the phonetics and the signifier as one more element of the music. And each language is a different instrument to sound different nuances, so we can not afford to let any of them die.

We speak of music a literary text when we expressly compose a musical work where a pre-existing literary text can be sung or said. From the point of view of the song as a genre, to music a painting would be to compose a letter and music expressly so that this painting can be sung. With songs we have on the one hand the abstraction of music and on the other the sounds converted into words that allow us to describe the tangible. The abstract and the definite inseparable. In short, overflowing the dimension of space in the painting and make it pass to the temporal dimension of music accompanied by the narrative element of the text, figurative or symbolic.

The relationship of the song with the painting is not new either. Just as we find influences from the popular song in Kahlo, we find the painting and the painters in the popular song: "Vincent" by Don McLean with references to Van Gogh's "Starry Night"; "Fourteen Black Paintings" by Peter Gabriel inspired by 14 paintings by Rothko; "Andy Warhol" by David Bowie; "Pictures of Matchstick Men" by Status Quo on the work by L. S. Lowry; "Magritte" by John Cale; "Oil of woman with a hat" by Silvio Rodríguez on Chagall; ...

"Antoni Miró, music painting" is, however, an unusual exercise: Musicians and singers conjured to create nine songs inspired by nine paintings by the same painter at different moments of his career. In just two months of the summer of 2018 we built a musical studio of the work of Antoni Miró. A musical look conformed by several styles and accents: Mara Aranda, Pau Alabajos, El Diluvi, Cesk Freixas, Miquel Gil, Lu Rois, Mireia Vives and Borja Penalba, Julia and who writes these lines. It is, evidently, an incomplete map resulting from the opportunity and the moment but open, like many of the painter's series, to be completed with new musics. We have also included the voices of the actors Francisco Anyó and Pepa Alòs, who interpret poetic texts by Isabel-Clara Simó, Josep Piera, Marc Granell and Ovidi Montllor, who talk about the painter and his work. We can not forget authors such as Salvador Jafer, Martí i Pol, Espriu, Estellés, Pérez Montaner, Joan Valls, Jordi Botella, Rodríguez-Bernabeu, Rafael Alberti, and many others who have dedicated verses to the pictorial world of Antoni Miró. And special mention should be made of the song "A l'Antoni Miró" by singer-songwriter Jordi Gil [Gil, J. (2007). Intimately (1st ed.) [CD]. Penáguila: Audioart].

Antoni Miró's painting is intimately related to music and song, in my opinion. Every night, as Josep Sou writes: "The painter, the artist, the creative, listen to the music that rises in the atmosphere of his study, and that generates the ideal coverage to draw worlds without anchors." It is impossible to think that each note, each silence, does not condition his work.

He has painted musicians and instruments as well, he has illustrated the covers of countless albums, but it is in the dance where he has captured, where he has stopped the musical time to catch him in the space of painting. Antoni Miró has painted Bob Dylan, Carles Santos, Pau Casals, Maria del Mar Bonet, Víctor Jara, Quico Pi de la Serra, Raimon and, above all, his friend Ovidi Montllor, a friendship that led Ovidi to act as gesture model for Antoni Miró and is the same painter who in " Tereseta i Ovidi" 2013 / Alcoi (acrylic-mixed canvas, 162x114) has brought to the painting the song "Homenatge a Teresa" [Montllor, O. (1972). One among many (1st ed.) [LP]. Barcelona: Discophon].

The great majority of the representation of musicians in his work, however, are not musicians in action, they are their faces, their interrogative looks in the way of the awareness of Antoni Miró's own painting, referents for their values ​​and aesthetic visions. As Fernando Castro says, Antoni Miró "fixes images despite everything, with a constant ethical attitude".

It is this ethical attitude, the red thread that has connected the selected paintings with the musical works that we present in "Antoni Miró, music painting". Critical figuration, the chronicle of reality to the stark description of the inhumanity of cities and the world "to denounce wars, racial discrimination, the exploitation of men, the hegemony of empires (economic or military), destruction of our planet, the misery of our own history »in the words of Giralt-Miracle, to« try to offer critical emancipatory instances ... with precision and always with fury »as Fernando Castro writes. With a Valencian look that according to Joan Maria Pujals "often has a grotesque, bizarre, satirical tone" because despite the contemporary global disaster, in Antoni Miró, as Corredor-Matheos writes: "Colour, then, in contrast to what it is denounced, it has happy notes ». These «happy notes», these lines, perspectives and colours are included in "Antoni Miró, music painting", from the stylistic plurality of the different musical proposals that have been gathered. 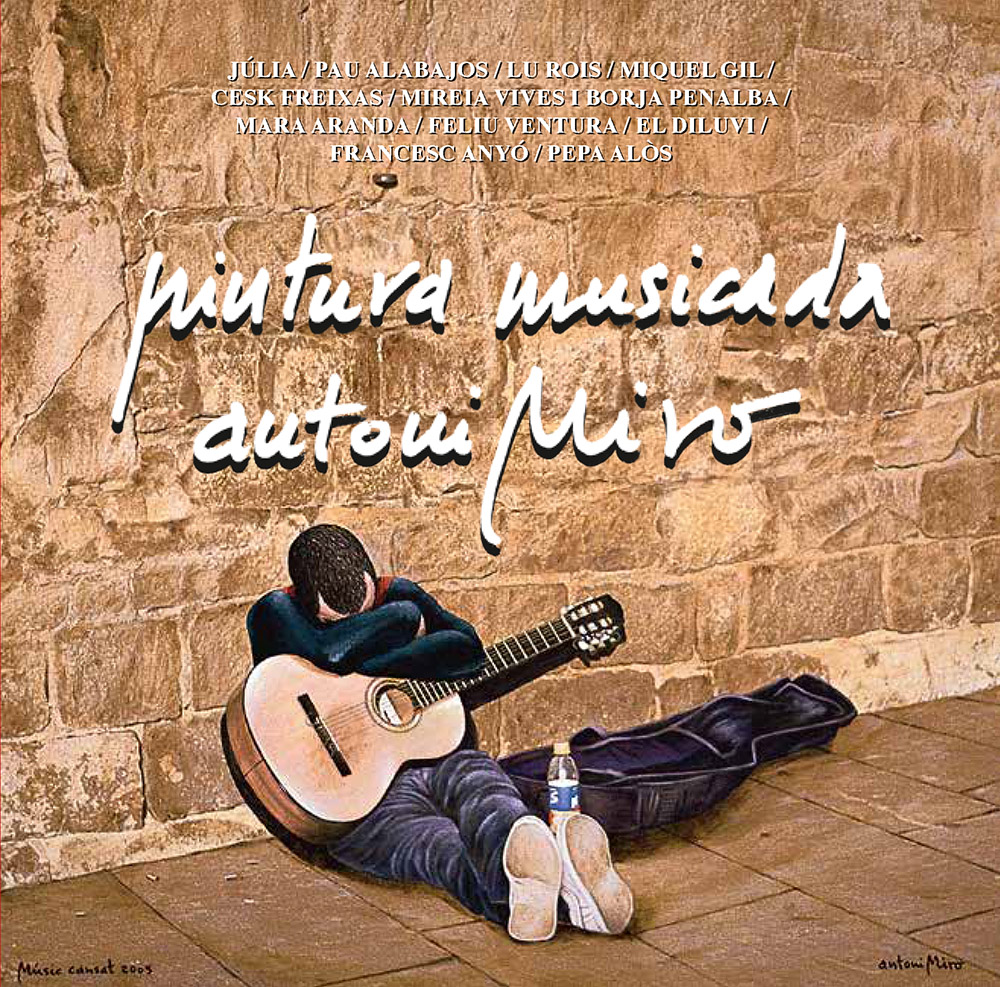