The image analysed and reproduced on canvas has been continually studied with different methods throughout the history of the visual arts becoming the subject of controversies and dialectics which make blunt contrasts capable of leading to exasperation. Language has found a support in sound, which has extended its notes and progressed in a musicality which has enabled peoples to communicate. These phenomena have suggested associations with different wavelengths, creating alphabets in the interpretation of nearby objects. Thus there is a tendency to go on to a higher form of expressiveness which leads to relations between peoples.

Gesture, which cannot avail itself on an alphabet and wealth of rudimentary primary points such as those of a disarticulated sound, has also evolved. Gesture, like sound, is born of an ancestral spontaneity which has guided the hand of the cave drawings and the first rudiments which have made man different and more evolved.

The road to the dichotomy of language and the visual art has always been difficult, as Lyotard has so often reminded us.

The option towards «sing-writing» has been chosen when our unconscious has been deeply investigated and it has been considered necessary to recover free movement, and not with the interpretation of a figurative image. Gesture as a release, a critical cry on canvas, superseding proportion and beauty.

On the other hand, the use of a virtual reality, meticulously created with everyday event, has had the effectiveness of an equally prodigious fracture, ending in the inversion of mere rationalist “description in favour of imaginative and psychological sublimation. A prerogative which has involved the representatives of a «hyper» vision and has been successively assumed in recent years in the paintings of Antoni Miró.

The «formal overabundance» of his works is clothed in fantastic connotations and a truth which has a raison d’être whenever it comes from afar, from the scrupulously chosen basic points, to take up very personal and original aspects in the sharp contrast between colour-material and the word. He manages to acquire distant experiences which are balanced on the line which separates representation from nominal designation. He overcomes the powerful presence of the object, not by isolating it or taking it out of context, but by affirming its «oneiric reality», such as that described by Freud in is «Traumdeutung».

The image indicates the way of a repetitive progression of events destined to be the stills of an existence marked by similar rhythms where thoughts prevail. Miró wishes to confirm an idea held in great esteem by Magritte, the «similarity of thought» to a world which he manages to observe and interpret because «he becomes what the world offers him». Regaining the vision of a deep philosophical thought, the artist confirms the physical inconsistency of an activity which produces mental, spatial contents like the sensations, whether negative or positive, born of daily experiences.

The form of painting which, in his work, lends shape in a tangible way to superstructural evolution, comes into play. The discrepancy manifests itself at the time of a metamorphosis which makes and realistically translates the fiction created by the regular, monotonous conduct of events. Miró alters the «principle of identity» and each object throbs and contrasts, not so much because of proximity to other objects, beyond any pertinent logistic design, but because of the function of attributed futility and often accompanied by letters which do not make their interpretation any easier.

The invention of unusual objects, functional inversion, structural and material change, replacement of words with pictures, naming and object many times, denying the obvious and splitting the image into two at its ambivalent source in a constant search to prove that banality and the oppressive game of passing the time are even more inexplicable than violent incidents and open up paths in the mind of whoever observes a world so distant and yet so rich in familiar references. One would like to join in the game, one is attracted by the fantastic images, but one is blocked because one is disorientated in a sea of contrasting references which shake up the mind, which enter into action on the senses, establishing a state of depersonalisation in anyone who asks for certainties and assurances.

Miró cannot provide the latter, being coherent with a way of thinking produced by the presence of a multiple personality in each individual which may be described with the object becoming strange, and with the obvious paroxysm in the attribution of a nominal indication sustained by a thread which can be broken.

Desperation does not always come from cry, the movement or the decomposition of an image which shows its precarious and destabilising side, but also from the discovery that behind one reality another is hidden, and another, and yet another, like Duchamp’s «engineer of lost time». The invisible is captivating, but unconquerable. The truth does not exist because of its incongruous nature, therefore Miró uses the feasible, the visible as a means of research to overcome the barriers of the mind, to create functions which set in motion the rusty mechanism of existence.

Evolution and vexation which enable one to proceed with analyses based on the strangeness of the objects, but also on the affinities which can be seen in many of them which produce an equally agitated presence. The painting becomes a field of action for the object, for what we associate with it and for the meaning we seek in it. Repetition, not proclaimed transgression, the ambiguous difference between showing and naming, communicability through graphics and the awakening of a new language with proven techniques are stages in a «game» which anticipate the stops, but which has no end in a «vertigo» of opposites which hurl us into the painting, propelled by the force of he who knows that is not possible to stay out if one wishes to participate and understand. 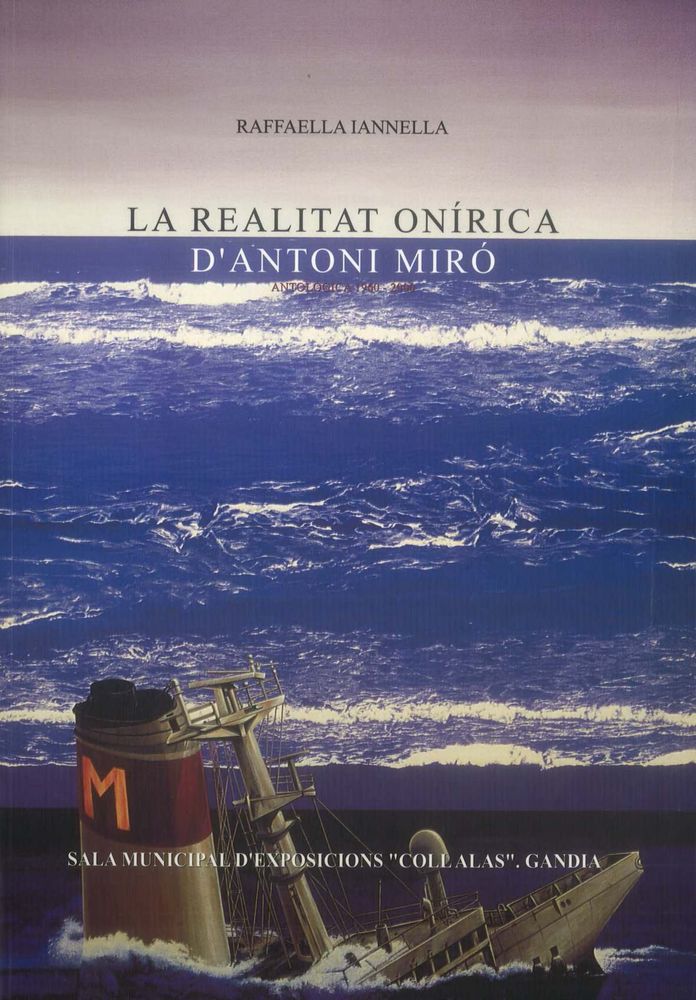