Miró and the polyhedric look

THE ARTIST AND THE AREA HE LIVES ON

As the first quarter of the 21st century goes by, we find that, in a farmhouse called Sopalmo, made of thick walls, reconstructed and methodically enlarged, located in the midst of the fresh rain-forest of southern Valencia, the artist-painter Antoni Miró lives, grows and creates under an elm.

Something like that could be the beginning of this article, written by Hume. As in the mid-eighteenth century, the Scottish David Hume begins to practice his empirical method, distinguishing the cultural behaviours of a specific society in which you can recognize social causes alien to chance, such as economic aspects, forms of government, relations between minorities and elites, etc. Thus, the mutual implication between art and the civilized environment in which it lodges is born. This dependence will become evidence when Hippolyte Taine achieves full maturity on the "Milieu" theory or the environment as a relational dialectic between art and society, based on race, environment and moment.

For this historian of French art, the creator of an artistic work does not start from zero, he is aware that he is in a situation that conditions him, holds the tradition given by the historical reality that he is living and that allows him to place his art in its circumstantial scope. The understanding of what surrounds him creates a tension between the work and the present, and allows the community guidelines to be incorporated into the perception, as an automatic recognition of what is already known in the world and identified in the work of art.

"So that the duty of any artist and writer is to reflect in his work the expression of everything that happens and lives around him", says the art critic José Francés.

Taine's starting point is the recognition that the work of art is not produced in isolation and that it is necessary to search it in the whole, the totality of which it depends and at the same time explains.

HG Gadamer makes a new twist in artistic hermeneutics, considered as the understanding of the conditions in which the artistic act takes place, establishing a relationship between the sender and the receiver through the interpretation of this fact that will end in its understanding.

A work of art for Gadamer is the product of a civilization at a given moment that must necessarily be understood historically.

Antoni Miró imbibes from these sources; he is not a formalist of the "art for art" as Kandinsky said, all detached from his surrounding reality, but his work is effect and consequence of the time he lives in.

Facts, not words. Miró is a pragmatic lover of facts; it is not by chance that he lived in Dover in his years of researching the center of gravity!

This painter-sculptor makes works linked to the global order of existing social behaviours, to which he offers alternatives. Antoni does not seem to want his celebrities to interpret the already given, standardized world, but rather that they transform it ; that they have to be the connecting instruments of the change as to  change the present reality. To achieve this, it adheres to the current overflow beyond the walls of the Fine Arts, so fiercely categorized since the Enlightenment, and tries with a practical, interpretive, but understandable art, to clarify and channel the excesses of a trade that extends and overflows towards the mass culture "of sudden and consumable impact", as far from values ​​as the visual aesthetics of calm and reflection.

Antoni Miró works frame by frame, with results that apparently do not belong to any school or style, and if we have to point out a characteristic of his work it would be the persistence in the methodical, scrupulous and constant work, a sustained effort until achieving a huge work of more than 4,000 paintings.

We can consider Miró as an autodidact who paints paintings  related to psychoanalytic, with an ideological commitment. An artist of meticulousness that leads him to follow a personal diary written since 1958, a correspondence with his circle of trust and a selection of environments and people in disparate lands where he tries to feel comfortable.

Demanding in his own work, he launches his nonconformist proposal, uncomfortable, ironic (without reaching sarcasm) and rebellious.

His systematic painting manages to structure and arrange in the canvas the most throbbing and disturbing dramas of our globalized society, with a precise and coherent sense where he rhythmically orders his worries and obsessions: money, violence, religion, sex, nature, apartheid, the loss of identity, the absence of values ​​... and all this expressed in perfectly systematized graphic series. Silent and observant, his work is marked by his convictions. His ideology speaks for him.

Miró considers culture as "the straight path to freedom" and affirms that "art must necessarily be critical"; painting means for him "to live the only way to survive", but this art must be based on perseverance, meticulous order, creativity together with the shyness of a busy retreat, although all this framed in a communication not at any price, but through ethics and aesthetics.

If we dive into the antecedents and consequents of Miró's painting, we must analyze Rauschemberg, who acts as a bridge artist between expressionism and a new genre of figuration and paves the way towards the phenomenon of images of mass persuasion, the followers and the creation of uncritical myths that substitute the meaning of rules of behaviour, freely thought and accepted.

If we try to classify Miró in the new figuration, we will first say what the painter does not do. We will not find him in the Action painting movement (W. de Kooning), nor in the figurative expression of Jan Lebenstein with his anthropomorphic figures, nor with Francis Bacon with his axiality, nor with Antonio Saura who uses the figure as a tremendous structural support; and he is not with the so-called "Brut art". Miró does not travel through the paths of the objectual textures, papers, sands, sackcloths that contrast and impact the retina, nor with Antonio Bueno, trying a path between abstract and figurative art, or with the oniric and expressionist painting of José Jardiel or Cardona Torrandell.

Rather we should look for his antecedents in the New Dada, the Pop Art, the Social Report or the New Realism as a direct appropriation of elements of reality and a connection with the daily in the form of narrative, formative and informative denunciation. He looked at Social Report taking the elements of his works from the consumer civilization (Pop Art), such as Jasper Johns and Oldenburg, or from the civilization of images, such as Rauschenberg and Lichtenstein.

With Miró we approach to the customs officer Rousseau, to Magritte, to the elegant and eclectic solutions of Eduardo Arroyo, to the Crónica team (Solbes and Valdés) and to the iconic civilization of Rafael Canogar from 1960, together with the work of Juan Genovés.

Antoni Miró maintains an artistic reaction against the imposition of informal language, vindicating figuration as an element of expression, of denunciation and of social criticism. Admirer of Vermeer, Ribera, Velázquez and Picasso, he travels through the same figurative meadows of European masters.

He frequently works in the sphere of meta-painting and borrowing, with appropriations and loans, adapting a former work (or a part of it) to his personal criteria and proposing a new message, reinterpreting it. This yes, Miró in all he undertakes establishes the rhythm, the order and the perfection following its internal compass.

The face is the image of the soul, said Cicero, and with this badge, Antoni Miró recreates the features of the faces that invade his beliefs and social values. The portraits suddenly appear between the sepia and gray chiaroscuro of its folds and incarnations, invading the entire surface of the acrylic, trying to point beyond the rectangle of canvas which can barely contain them, to contact  the spectator and  to explain who they are and why they are there.

It is in 2015 when Antoni Miró exhibits "Personajes S / T" at the Fish Market of Alicante, as the result of the expansion of another work that had been shown at the IVAM of Valencia in 2012. More than 50 poets, singer-songwriters, philologists , politicians, artists, activists, creators and thinkers who boil in the head of the artist of Alcoi are presented to the collective imagination. And he has not ceased since then to do more.

Following the pre-Raphaelite Burne-Jones when he says: "The portrait is the expression of character and moral quality". Thereby Miró considers his portraits of the characters who have contributed their social commitment with their work and its connection to their beliefs, being artistic, political, literary, musical. etc.
He chooses carefully the images of the portraits, those who allow himself to deeply identify the character and that reflect : “the internal vibrant form of the painting”, as  Genovés said.

Miró tells us about his portraits : “It has been a long time since I wanted to begin with this collection. Years before I painted some portraits that I considered of interest for the society, but since now I could not begin an in-depth work. I selected a lot of my referents, great part of them fighters that are no more with us, but that have let an enormous legacy”.

The portraits obtain referential status in recognition of their careers, selfless fighters in the trench of change, at the knife’s edge, who handled guns, pens, grammar…; they danced, singed, painted, built, denounced injustices, led nations, revolutionized workers, ran orchestras, managed psyche, survivors of extermination camps, fallen for their ideals, maintaining utopian flags. All of them trapped between sense and outburst.

Miró knows or has known large part of them, most of them met him or wrote about the artist (or the artist about them), struck up a friendship, corresponded and they have reserved or dedicate a space in their life and in their heart. We refer to Ovidi Montllor, Sol Picó, Martí i Pol, Salvador Espriu, Joan Fuster, Joan Valls, Rafael Alberti, Vicente Andrés Estellés, Isabel-Clara Simó, Andreu Alfaro, Antoni Tàpies, Joan Brossa, Arcadi Blasco, Antonio Gades, etc.

Joan Fuster said that the great passion that emanates from the work of Antoni Miró is that of an "Attempt to be him among his people".

And Miró says: "If you do not care about your bases, your land, your family, your world, you will hardly get anywhere".

Miró's polyhedric look is a call to the character, as it allows him to place his image forever among his pupils.

His series of portraits are a testimony of the attempt to establish the foundations of Antoni Miró's belonging instinct, projected towards a group of men and women with a passionate, combative and non-conformist life, who have opened, albeit with blows, the accomplice paths taken today by the generations that are trying a new way of living, searching new solutions for this new world at the beginning of the 21st century, because as Antoni says: "To be born is to learn to live, so in the end, to die well" . 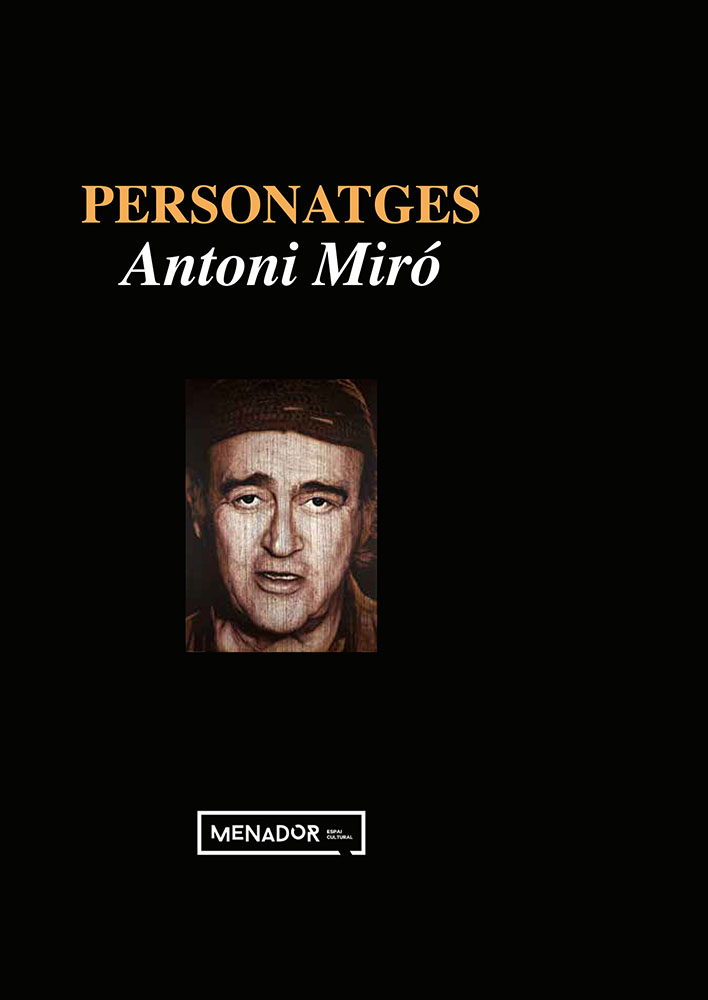