The origins of the Big Bang

The Big Bang! This expression used by astrophysicists could also be called the Big Explosion... or the Big Fard. Often scientists are inclined to make jokes. We can’t believe that they are serious people for 24 hours a day, keeping their noses stuck to their microscopes, telescopes and all those sophisticated machines, and totally ignoring anything else that happens outside their labs. When they reached the conclusion that in the beginning of the Universe all existing matter was concentrated in a kind of minute super-atom which immeasurable density and that it exploded, forming what we now see when we look at the sky, they were terrified, amazed and stupefied. Sceptical because they thought that nobody would believe them. It wasn’t just a hard pill to swallow –it was a more like a grindstone. Not only that, -they were afraid that people would take this theory about the formation of the Universe, as a huge joke and that they would be hideously disgraced.

One evening, when they were thinking about the problem in a classroom at the University, discouraged because they couldn’t find the solution, they heard “Bang! Bang!” Looking out the window, they saw some children playing Cowboys and Indians. One of them was trying to perfect his aim shooting arrows held by his enemy. When he hit it, he said: “Big Bang! I won the battle! Surrender!”. The balloon had certainly burst with the classic pop! Then one of the scientists said, “Eureka!”, which is what one says in these cases, before slipping in the bathtub. And he explained that, not only was the explosion of the balloon comparable to what happened at the beginning of time, but also that the child's balloon, if he’d spotted it with a pen before blowing it up, the spots would separate, getting further and further away from each other, the same way galaxies do. This way, people could grasp a familiar and very comprehensible concept, the almost perfect image. They would probably also swallow that other pill that needed to be sugared, the Expansion of the Universe theory, thanks to the child's balloon. But they decided not to say anything about the children, the cowboys, and even less about the Indian bowmen, just in case the anecdote detracted from their merit in the eyes of the Swedish Academy.

They started publishing the theory of the Expansion of the Universe in scientific magazines, based first on their observations of the spectrum of the stars, and afterwarsa, on direct radio-telescope observations. They also published the Big Bang theory. In general, after the expected commotion, the theory was well accepted because it was understandable, thanks to the child’s balloon. As a consequence, the rest of the astrophysicists in the world set to the task of getting the most out of the discovery. Thanks to mathematical progress, they took the Universe as it is now, and backing up, got ready to elucidate how it was in the moment of the Great Explosion, and how long ago it was that the super-atom exploded. But then their problems really began because, as they got closer to the birth of the universe, they found more difficulties... to the point where they haven’t succeeded in reaching it. And that’s where they are now, despite black holes and the Hubble telescope. It’s too bad, after all the trouble they’ve taken.

But not all great scientific discoveries are made in labs or observatories. Think of Galileo, who, throwing pebbles and rubbish from the Tower of Pisa, got himself into a lot of trouble. Or Archimedes in his bathtub. Or Newton under an apple tree, etc. So, I have to say, modestly, that at the Mas de la Sopalma the definitive discovery has been made about the birth of the universe. These fundamental discoveries in the History of Science should be taken in the context of their own time and space, if they are to be properly comprehended. This is why, before getting to the heart of the matter, it’s necessary to go into some detail about the now famous Mas de la Sopalma and the way people lived there in the glorious age of the Great Discovery.

Did you know that in years past, not too long ago, it was quite difficult to sleep at the Mas de la Sopalma? When the present owner, Mr. Miró, bought it for a song, it was a monstrous house, about to collapse, and full of a variety of animals. From the pigeons, this flew freely into all the room s and through the passage ways, bombing manure on you with admirable aim, to goats, sheep, donkeys, roosters, chickens, ducks and pigs, including seven terrifying dogs and some twenty starving, ill-tempered cats. With this permanent company, you can understand what I’ve already said: it was hard to live there in peace.

But if there was anything that truly identified the Mas de la Sopalma, if anything was characteristic, for which it was universally famous, it was dust. Thick, foggy, hazy dust that took over the whole house, every nook and cranny, every room. It was the direct consequence of all that fauna roosting in the Mas. Circulation was very difficult, and finding the room you had been assigned was a task fit for expert explorers. I remember that we walked the passageways ringing a little bell to avoid collisions. And I, personally, carried, besides a compass, a spool of thread -like the famous Ariadne-, that I tied to my door handle and let unwind as I got further from my room. That way I was sure to get black. All told, delicious!

I suppose that, if I’ve explained the situation correctly, you have an idea of the difficulties of living in the Mas de la Sopalma during the day. But how about the nights? Friends, that is another matter altogether. You must know that the electric light bulbs -very few of them because the former owner was very stingy- hardly cast light an inch in any direction, because, too, of course, of the famous aforementioned dust. To avoid accidents, people were not allowed to circulate at all after sunset. Guests took a sandwich containing one anchovy -a generous offering of our hostess- and shut themselves up in their rooms, to try and get a little sleep, at the same time that neighs barks, meows, grunts, baas, etc., would be heard all over the house.

Under these trying circumstances, the transcendental discovery was made; the surroundings are always the basis for the success of any scientific endeavour. The more difficult the obstacles encountered, the more human ingenuity rises to the occasion. The greater the hunger, the more gray matter works, and the sleepier we are, the more we are submerged in outer space which, as you know, where the galaxies are.

It happened that, one night -I seem to remember that it was number 27 in the series of constant insomnia- I thought I heard a strange noise above the usual various house noises, one that didn’t seem to have an animal source. And so, as I left my room in terror, a ghost -or so I thought at first glance- crossed the living room carrying a telescope. “Hey, who are you and what do you want?!” I asked him, with the most terrorific voice what I could summon. The answer surprised me, “I’m the owner, and I’m going to observe the sky in order to paint it.” And so it was: the dusty fog that filled the house had made me mistake Mr. Miró for a ghost. I should explain, thought, that Mr. Miró was wearing a painter’s smock that was out of style and spotted with acrylic paintings, his favourites. Once we had identified each other -as much as possible, given the fog- he graciously invited me to accompany him.

When Mr. Miró opened the terrace door to install his telescope, the concentrated fog that was in the house took advantage of the opening to escape into the starry night. It was so concentrated that I immediately thought of the super-dense atom that Origin of the Universe, because the night outside became as foggy as the inside of the house, without the fog’s losing any of its density. The theory of Communicating Vessels made house and sky reach the same level of dustiness. And this marvellous event was decisive when it came to finding the solution to the zero time problem, the beginning of the Big Bang. Observe the simplicity of the facts: a sleepless guest, a hard-headed artist, a foggy space, and a noisy, varied animal chorus. Because variety is fountain of life. In this case, for example, if rooster No. 35 mistakes moonlight for sunrise, it crows. So No. 6 donkey brays to complain, No. 54 sheep bleats to get some silence, and so on. Consequently: the varied, unceasing noise that in the whole region was unique only to the Mas de la Sopalma, encourages a different approach to resolving the question of why things are the way they are.

And Mr. Miró started painting by the soft light of an oil lamp so as not to be blinded. It was all a real spectacle. First he focused on the spiral nebula of the Hunting Dogs, which he painted in four brush strokes, then on to Jupiter, etc., etc. But on one of these rounds, he aimed the telescope inside the house without apparently being aware of it. I waited for him to realize his mistake, but I was surprised to see that he kept on painting the same galaxies he’d started to draw when he has looking at the sky, only now, seen from the opposite point of view. As if he was seeing them from the universal zenith, if you’ll pardon the expression. And he continued so until first light made him stop.

When he disassembled the telescope and we went inside, I dared ask him: “Mr. Miró, do you know what you’ve been doing? And he, paying no attention, answered me: “We’ve been to the other side of the Universe and I’ve taken advantage of it to give a Sopalma point of view, that's all!

I then started making the necessary calculations -which would be too boring to explain here, but they are at your disposal at any time- and the conclusion was that Mr. Miró is a high-ranking extraterrestrial, first generation or first Big Bang, and that, without letting me know, he’d taken me to the universal zenith to show me the galaxies in bird’s-eye view, to explain it simply. But the calculations also led me to more interesting conclusions. For example:

The idea that Origin of the Universe is animal isn’t new, although our demonstration of the cause being the animals at the Mas de la Sopalma is. But there are a precedents, as you can see:

The great Stephen W. Hawking, in his History of Time, tells this story: Once a famous scientist was giving a lecture on astronomy. He described how the Earth rotates around the Sun, and how the Sun rotates within a great collection of stars we call our galaxy. Towards the end of the lecture, an old lady from the last row got up from her seat and said: “What you’ve told is silly. Actually, the world is a flat tray held on the black of a giant turtle.” The scientist smiled in a superior manner before answering: “And on what is the turtle standing?” “Ah, you smart young man, very smart,” the lady said, “but there are turtles all the way to the bottom.”

From here let us vindicate the intuition of the old lady. She was only mistaken in the kind of animals. Because, as I said before, variety is the “fountain” of life. 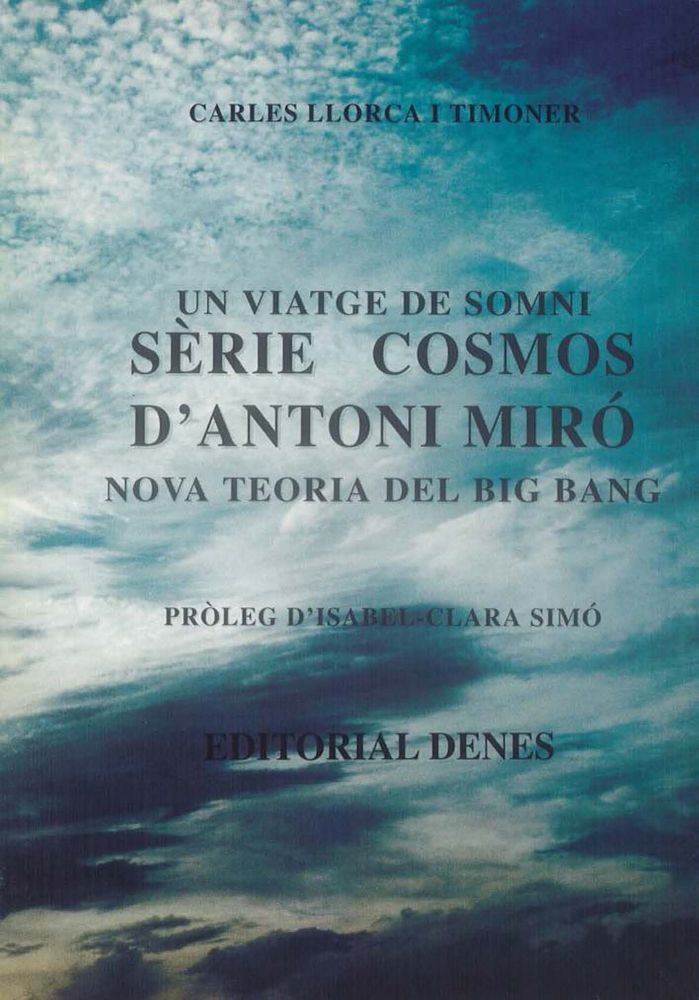