Talking about the recent work of Antoni Miró does not stop having a certain degree of irony, one more, of this nocturnal bird that takes advantage of the quiet night in the silent and secluded Sopalmo farmhouse to work tirelessly, with a volume of production more typical of a restless young man than of an honourable senior gentleman.

His recent work of hundreds of paintings evolve from some master ideas in certain collections. The fan deployed in a game of colours, textures, techniques and approaches, make up, by rigorous accumulation, a detailed, diverse and complex look on the subject of reference, be it bridges, machines, bodies or social conflict.

Joan Fuster already said that the Alcoyans are the Valencians most similar to the Catalans we can find, not only for their saving nature and lovers of work well done, but especially for their esteem to the technique, to the engineering, to the productive processes, to the machinery.

You will not find in Miró's work any reference, sentimental or critical, to the countryside, the rivers, the mountain or the landscape, all of them important attributes of the region of l'Alcoià. His gaze is never directed towards the rivers, but towards the bridges; you will not find the landscape, but the architecture as a productive structure; it will not captivate you with the exaltation of the design of the devices or tools, but will directly find a tribute to the machine and the industrial structure. Moreover, nor when persisting in his unwavering approach to erotic puncture will not place the bodies in an environment or in a suggestive environment, he shows the clean and naked body on an ochre background, in search of beauty and attractiveness in an isolated corporeal structure. Only in the Cuban series, influences of the tropics, can be, will find a certain chromatic joy, with measure, of course, as it is the case of the powerful and expressive portrait of woman in the exhibition.

May be that is why his work has not been characterized by primary colours. You will find few blues, yellows and greens defined in his paintings. These are colours too close to nature, too diurnal, too far from the neon of the workshop or the factory. They are not the typical colours of industrial structures, but of the spaces and objects that the Alcoians have deeply internalized as an inalienable part of their historical memory, of which, by the way, they are well paid and for cause.

In this exhibition, however, which includes a selected sample of the main pictorial series that he has developed over the last 15 years, two important trends of change can be observed. On the one hand, Antoni Miró has entered the contemporary city, in the daily scenes of our cities. He is attracted by marginalization and urban solitude that coexists with the consumer society and with tourism. The paintings try to make visible the hidden marginalized individuals of the system, be they people who make art on the street or the excluded, the beggars, the cripples. The social complaint is achieved by making evident on the wall of an exhibition a social reality that, day by day, is ignored. His irony becomes more sharp. On the other hand, he paints with a palette of colours that for years we were not accustomed to, combining his traditional browns, ochre, beige, black and grey, now with intense reds, lilacs and blues, a game of contrasts of colours in accordance with the different significances of the painting.

I have stopped more closely in some paintings. In Mourning in Rafah, I have been surprised by the expressive hyperrealism of 2 Palestinian women - one of whom we can only see the hand - who, in comforting a third -in the foreground-, make a cross with their hands of solitary duel of suffering, of death. But the work that has made me stop to see it more closely is Music in Toledo, may be because of what I said about the colours and the urban perspective in the recent work of Antoni Miró: Sitting on a folding chair in the street, a young concert performer, isolated and concentrated, with an absent look, or may be without looking anywhere, playing her oriental music, waiting for the walkers to leave a coin in the box of the instrument on the floor in front of her. Further forward, tourists that have already passed carrying shopping bags are becoming evanescent. The brown and blue / blue loser of the musician contrasts with the intense blue of the future towards where the walkers go. The pleasant velvety indifference of the tourists who converse with each other in the background, exalts the static solitude of the player in an hyper-realistic close-up.

A constant in Antoni Miró’s work is the social commitment, the causes of the losers, of those punished by the injustices of the system, of the movements of social and national emancipation. His work denounces the ideological character of the image of mass culture and the great possibilities that open up with its re-rationalization for a critical or at least ironic political use. Because what counts in the activist art that Miró practices is its propagandistic effect. In re-contextualizing or de-contextualizing the iconic figures of the global cultural system, it manages to take advantage of the discursive potency of any of the myths of the popularly accepted official discourse, and thus, subverted, bring to light, to a new look, paradoxes, ironies and the contradictions of visions, as much of mass culture as of art itself.

The exhibition also reviews, makes a kind of social chronicle, of the global social movements and of the Country that have marked the last 15 years: the ignominious war in Iraq and the attack on the Twin Towers, the tragedy of the refugees and the wars (clean and dirty) in the east of the Mediterranean, the Palestinian insurgency, the Valencian spring, the crisis in Vandellòs, the sovereignty process of Catalonia and Scotland, etc.

The work of Antoni Miró is of a disturbing realism. With the kind access and the easy apprehension of the images, a critical point, often bitter, becomes imperceptibly evident and patent, that is none other than the subtle ideological or ethical denunciation of the socio-cultural system we live in. When the City Council of Gandia commissioned him the great sculpture of April 25, 1707, a subversion of the Surrender of Breda, I wrote: "To the powerful symbol of the winning horses, surrounded by spears that demand their tribute, the image of the people in village, four times denied, with the four bars that stubbornly represent it."

His painter's gaze always has something of a graphic journalist, of World Press photography, when he focuses on a detail, a figure, a gesture, a scene or a context that has captivated him. The focused image reproduced with his brushes will show us the essential, free of all the accessory, raw, clean and pure. Therefore, the images obtained aspire to be something more than a mere aesthetic expression, they are not only a small historical argument, but inseparably to aesthetics and social chronicle, they also carry the incitement, sometimes with irony and sometimes with crudeness, the taking of an ideological position, to assume the evidence of social injustice, hidden or exploited obscenely by the mass media.

As a side of this social concern, of making patent, evident, visible, poverty, marginalization, misery, we can follow his ironic speech on art as a commodity. Museums and the commodification of life. Poor people begging in the doorway of the museums, rich people who are not. Middle-class crowds touring the world's hungriest art halls, fascines of fast-moving masses, currency stores, symbolic merchandise and of impossible contemplation. On the contrary, in the streets, the marginalized artist and, near home, small exhibition halls, galleries and art exhibitions that display with bravery and dedication the most contemporary art or the closest painters, always ignored.

With this exhibition we have a good sample to delve into the aesthetic and conceptual values of the recent work of this artist from the Valencian Central Region and, as always, be accomplices of his commitment to the values of solidarity, of denouncing social oppression, and indefatigable effort for the culture of the Valencian Country. 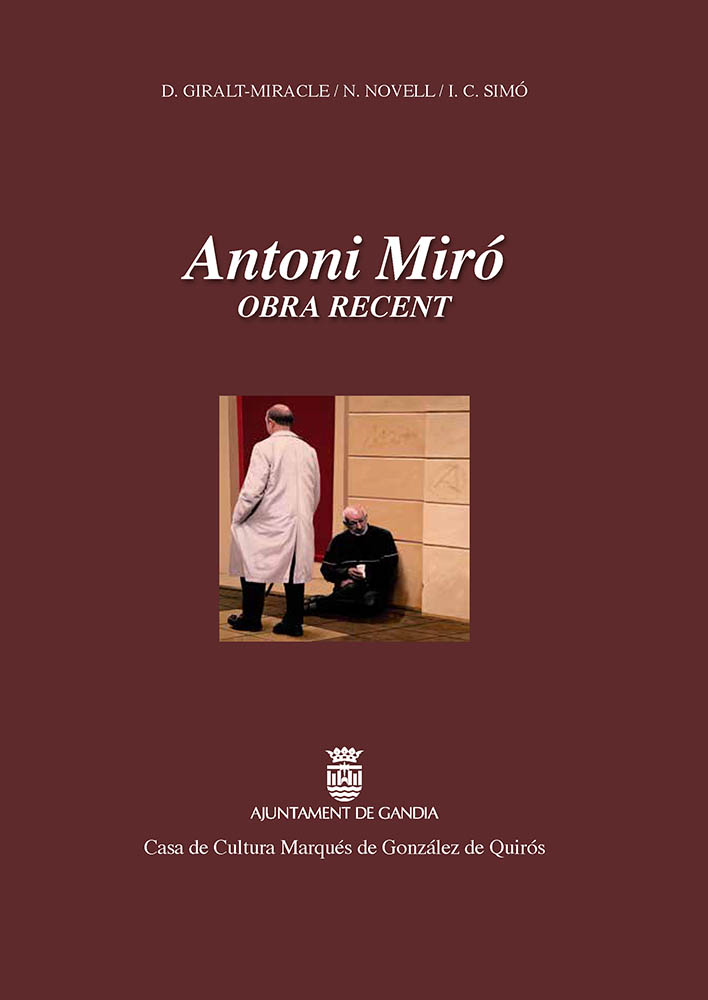