While it is a fact that art has manifested itself throughout history as the disciplined or anarchic fight of freedom of creation against all kinds of dogma, tradition or guardianship opposed to transforming will of knowledge, it is also true that at particular times there have been many who have succumbed to the pressure of power and its temptations so that the paths of history have also ended cobbled with many easements and submissions. Culture and power have never fit well nor change and immutability in many speeches told on the rhetorical dialogue between tradition and modernity. In order to obviate and to stop this impetus, it has been necessary, at particular times, to beget an army of impostors who trivializing culture and its transformative potential fostered both the false sensation of a well accompanied Power and the idea of thought and knowledge living comfortably turning self-satisfied within the establishment’s gears. Some faithful ones to the intellectual and artistic interests resisted and they did not make it easy for them.

País Valencià (the Valencian community) may be one of the best contemporary examples of manipulation of the cultural and artistic event through an extensive integration operation in the “official nature” of a good number of creators and those who have not accepted this fact have had no choice but going to other lands or shutting themselves in a long inner exile. When this issue comes out, two great people always come to my head and the two have in common their origin from Alcoi: Ovidi who had to go to Catalonia to make and live music and theatre and Antoni Miró, who sheltered in his farmhouse-museum in the highlands of the Alcoy territory has been painting, drawing, sculpting, engraving... without ever stopping. We could mention more examples, Raimon and Joan Fuster; Estellés and Genovés, Boix and Isabel Clara Simó… or others who came and went living the double exile experiencing both sensations. The misery accumulated in four decades of dictatorship together with the shyness and the lack of democratic radicalism of the subsequent transformative proposals are at the origin of the poorest political and cultural life, cause and effect of the mistreatment toward incorruptible creators and intellectuals.

I am not a specialist in art and, therefore, I do not live Antoni Miró’s extensive work from the point of view of the expert who looks at paintings or sculptures as a subject of study or aesthetic analysis. However, on facing a work, I always keep one of the essential principles that has accompanied the art from its origins: the ability to excite and the social function of potential knowledge generator involved in every artistic creation; his condition as witness of history and its transforming character derived from its innate ability to represent reality, in a figurative or conceptual form, with large formats or small pieces -who cares- if it is able to arouse the critical curiosity in the individual, suggesting creative proposals which, without sacrificing forms, nor beauty nor aesthetic harmony, invite to reflection, seed of all rebellions, because encouraging to observe leads to think and thinking is awakening Ovidi’s “ferocious beast” in order to assume the maverick clash against the “laissez fair, laisser passer” which Power and its integrated ones into the magma of imposture proclaim.

Antoni Miró’s painting is poetry when it is accompanying Martí i Pol’s stanzas; it is the dance when it is representing Sol Picó’s sinuous movements or the strength and feelings of Antonio Gades’ bronze torsos; it is the simplicity of life being toured from his bicycles; it is the suggestive eroticism of nude bodies; it is music with its authors: Ovidi, Raimon, Llach, Ventura, Maria del Mar Bonet...; it is the nature where we come from, so mistreated, which is facing with its branches painted in all colours against the excavators on the blue background of our Mediterranean; it is the rights and freedoms lost in the successive “25ths April” and “Philips Vs” represented on irons, pieces of wood or papers, it is the denounce of all wars with black silhouettes of soldiers in helmets and bayonet; it is poverty crouched in the streets of our cities which nobody wants to see although being a part of a lacerating landscape which others paint aseptic or neutral; or it is the “final solution” for the most unfortunate of marginalization in the country of opulence with series like the last suppers. It is the painting in all its forms polyhedral, as reality itself.

Through Antoni Miró’s work I have also found the exciting, evocative and visual way to travel through the history of art and its universal creators, from the anonymous hellenic classical ones to Picasso with his own renaissance mimesis label, accompanied by the series of the museums around the world painted from the inside and from the outside but merging their publics and architectures with their contents.

And permanently his work always makes a nod to the men and women who have materialized the culture of a country understood in the “ausiàs-marchiana” form, that is, that way when our language did know no Bourbon borders nor symbols were divided into fringes. Art and reality in all their forms, formats and feelings; emotion and commitment to his people; freedom of those who believed it and practiced it... all this is what I find whenever I have the opportunity to gaze at Antoni Miró’s work. 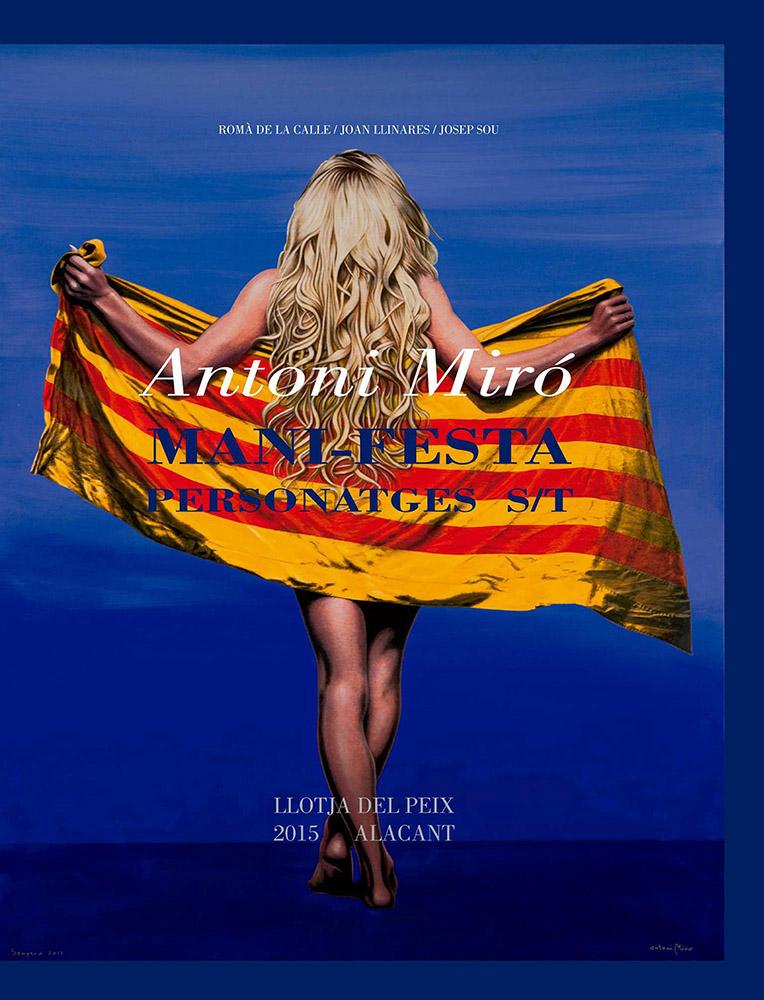